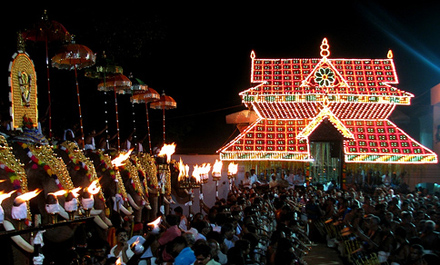 Arattupuzha is a village located near Puthukkad in Thrissur district of Kerala, and is home to the annual Arattupuzha Pooram Festival that stages the grand spectacle of scores of caparisoned elephants lined up in a row to the accompaniment of ethnic percussion concerts. This village is located on the banks of the Karuvannur River, legend has it that Arattupuzha was the meeting place of all the Gods of the world until floods wasted the area and forced some of participants to meet 14 kilometers north of the village in the city of Thrissur. On the sixth day of the seven day festival at Arattupuzha temple, 61 gaily caparisoned elephants gather in the temple grounds, accompanied by the temple music of Panchavadyam, nadaswaram, pacharimelam and pandimelam.

The rituals of the festival starts with Lord Sastha arriving in the temple courtyard to welcome the Gods and Goddesses arriving to attend the ‘devamela’ or the divine gathering of gods. Thousands of spectators who have gathered on the temple premises are witnessing a grand elephant pageantry features fifteen caparisoned tuskers. Adding to the festive mood is Pancharimelam, the traditional percussion ensemble, participated by 250 artists. The Pancharimelam team is led by maestro Kuttan Marar. The Pancharimelam performance is followed by a spectacular fireworks display.

Like many old villages, Arattupuzha is a place where some slightly colorful and alluring characters lived. One such legend is Raman Nair, commonly referred to as the “grand old man of Arattupuzha. Raman Nair claims to be more than 108 years old, even though there is rampant speculation that he is only in his 90s. A total of 23 gods and goddesses take part in the pooram at arattupuzha. The several characters which take part in the festival are: