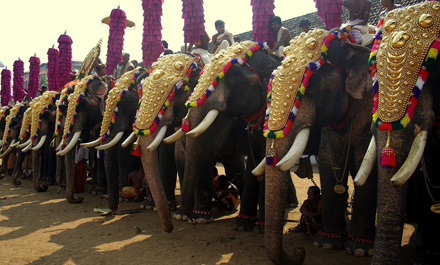 Adoor Gajamela or elephant procession is a grand festival organized on the last day of the ten day long annual festival at Sree Parthasarathy temple Adoor in the month of January to February as part of the ten-day festival at the Parthasarathy temple, which is closer from the peaceful backwaters of Alleppey. Gaja is Sanskrit means elephant and Mela means a fair. The Adoor Gajamela is therefore a fair of elephants.

In this festival the best and strongest of elephants from across the state vie against each other for the gajarajappattam which is a title which literally means ‘the king of elephants’. Elephants decorated in glittering ornaments and accompanied by traditional art forms like panchavadyam are a sight to behold. The gajamela is a appropriate conclusion to the festival which showcases the choicest of ethnic art forms. Take in a whiff of the cultural essence of Kerala with Indian Festival Tours. The elephant is the most well-loved and the revered animal in South India and more so in Kerala. Any temple or religious festivity without elephants do not achieve their desired altitude.

The history which lies behind the Parthasarathy temple is the nine majestically caparisoned elephants take part in this spectacular procession which starts from the Parthasarathy Temple and culminates at Chennapatti temple, 3 km from Adoor. Ottanthullal other traditional art forms are also staged on the tenth day. The shrine of Partasarathy is dedicated to Lord Sree Krishna, known here in the name of Parthasarathy. Partha’s is the other name for Arjuna who was a brother among the five Pandavas in the epic Mahabharata. And Saraythy means charioteer. Lord Krishna drove Arjun’ s chariot during the Battle of Kurukshetra. The temple also celebrates Ashtamirohini the birthday anniversary of Sree Krishna. Parichamuttukali which is a folk art resembling the martial steps, Mayooranritham which is a Peacock dance, Ammandudam, Velakali which is dance symbolic of ancient warfare, etc. are performed at the temple during the Ashtamirohini festival.