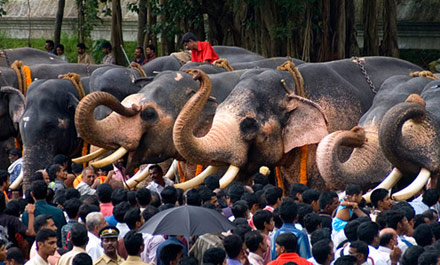 The Aanayoottu is festival celebrated in city of Thrissur is an occasion where people feed elephants held in the areas of the Vadakkumnathan temple situated in Thrissur of Kerala. Vadakkumnathan Temple, of Thrissur is famous for this festival as in this place the majority of all elephant feedings in Kerala takes place, is one of the largest and ancient Shiva temples in Kerala. This temple is an enduring example of the Kerala style of architecture with stunning murals showing various episodes from the epic Mahabharata.The festival falls on the first day of the month of Karkkidakam which is literally known as timed against the Malayalam calendar, which matches with the month of July. It involves a number of simple elephants being positioned amid a multitude of people for being worshipped and fed. A large number of people make crowd before the temple to feed the elephants.

Every year of Aanayoottu, or the worship of the elephants, is celebrated in the state of Kerala with great pomp and show. It is believed that offering poojas and delicious feed to the elephants is a way to satisfy Lord Ganesha as he is the God of wealth and of the fulfillment of wishes. The Vadakkumnathan temple, which is considered to be one of the oldest Shiva temples in southern India, has hosted the Aanayottu event for the past few years. The special food of the elephants includes sugar-cane leaves, coconut, jaggery and the sweet mix of Ganesha pooja prasadam. The feeding session starts with a present by the chief priest of the temple which is usually to an elephant calf. The festival presently involves sixteen elephants; the number was previously higher which is up to the number of fifty, but was reduced following under direction of the district administration.During the festival, the elephants are fed on rice, jaggery, ghee, pineapples, and other local produce.

The elephants are hailed as sacred animals which is a faith as it explains the presence of elephants in the South Indian temples. Elephants are an integral part of Kerala culture, and elephants are integral to all festivals, including the Aanayoottu. Many of the famous south Indian temples have a number of their own elephants; feeding these elephants are considered as fortunate. Looking in to these devotes feeling the temple authorities started these rejuvenation therapy as a public event named as the celebration of luck and goodness.