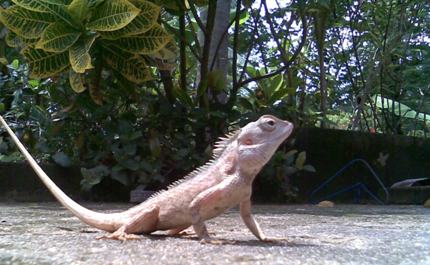 Star tortoise with beautifully patterned stars on its shell occurs in Chinnar Wildlife sanctuary in Kerala. Female is larger than the male. They live in scrub forests where summer temperatures get to over 45 degree Celsius during the day. Chinnar being a rain shadow forest region of Kerala is a typical habitat for the star tortoise. Illegal trading of this beautiful tortoise as per has led them to endangered status.

King cobra is the largest of venomous snakes in the world. It is the only snake in the world that builds nest for hatching its young ones and lives with single mate during the whole life time. The habitat of this king of serpents is moist evergreen undergrowths and reed brakes near the cold streams, in the interiors of Western Ghats and Himalayan foot hills. Their food includes chiefly other snakes and their own young ones.

It is one of the rarest turtles in the world. It inhabits in the rain forest of kerala. They live in damp forest floor and hunts millipedes, snails, insects, mushrooms, fruits and vegetables. Once it was considered as extinct but was rediscovered by biologists in 1980s in the forests of Kerala. An adult of this species is just the size of human hand and is the smallest species in India. The three ridges on the dull brown shell make it blend with the dead leaves on the forest floor. Hunting for meat poses threat to this rare turtle.

Kolavipalam at kozhikode is the mass nesting site of highly endangered Olive ridley turtle, a marine creature that grows up to 3 feet. A female ridley lays around 150-180 eggs at a time. The eggs hatch after 50 days and the two inch long hatchlings come out of the pit. Hearing the sea they move towards the waves. The villagers here take measures for the survival of these turtles.