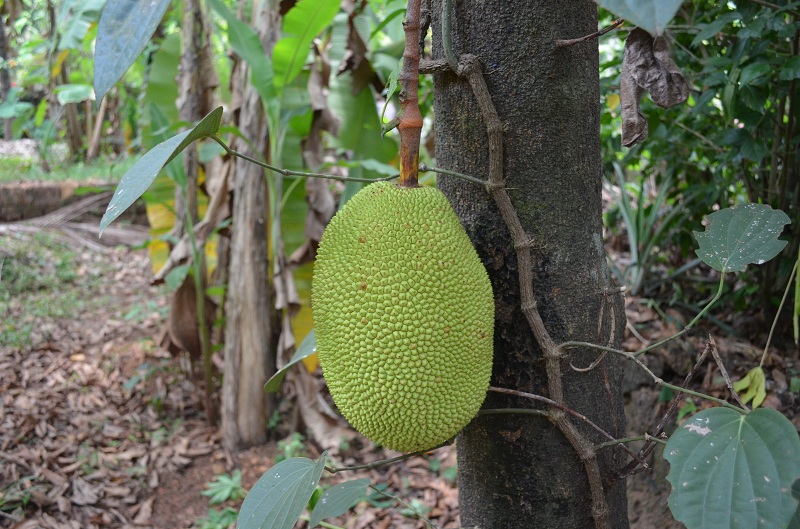 Seethappazham (Annona squamosa) is found in all parts of Kerala, in family properties. Sugar-apple or sweetsop (sweet sop) is the English names of the fruit. The muntiri pazham is another name for the fruit. The same name refers to grape fruits as well.

Favorite eatery for children, sugar apple is rarely cultivated in Kerala. People would plant a seedling or two in their property and that is all to talk about cultivation of sugar apple in Kerala.

Sugar apple is imported to India from the Americas. The plant looks like a large shrub, irregular branches. Leaves are deciduous. Flowers are borne towards the tip of a branch. The three fleshy sepals fall off after a few days of partly opened state. There are also three tiny scale-like petals.

The compound fruits are ovoid to conical with a number of segments, each representing a fruit inside. Ripe fruits can be easily separated with hands. Inside, each fruit bears a 1-2cm shiny black seed, which turns brown when kept in sunlight for an hour or two. The white to creamy edible part is sweet, juicy and delicious. The fruit is opened with hands and broken into a few pieces before the fleshy part and the seeds within are separated with special teeth-lip-tongue movement, inside the mouth.

Use of seethappazham in other culinary preparations is almost totally absent. In Ayurveda, the leaves of the plant are used in the treatment of hysteria, fainting, ulcers, wounds, dysentery etc.

Jack fruit tree is a large evergreen spreading tree known for the largest tree borne fruit in the world. Jack fruit tree is mostly seen in the tropical lowlands. This fruits is large and fleshy and are covered with thorny tubercles. Unripe fruits can be cooked. The seeds may be boiled or baked. Amongst a number of varieties of jackfruits, the honey-jack (muttan varikka or thaen varikka) is considered the sweetest and the best. The flesh is starchy and fibrous and provides energy. Jack fruit tree is used in the treatment of various diseases such as vitiated vata, pitta, diarrhea, skin disease, urinary retention and general weakness. The timber of the tree is used for making furniture as it is termite-proof. The core of the aged and seasoned jackfruit tree (Varikka plavu) is used to make the two feet body of the chenda. Ammachi plave, the name given to an old jackfruit tree in the Sree Krishna Swamy Temple at Neyyattinkara near Thiruvananthapuram, is legendarily connected with the time of Marthanda Varma, the founder of Modern Travancore. It is believed that the King escaped from his enemies by hiding in the huge hollow of the Ammachi Plavu.

Mango, the king of fruits, is one of the most popular of the tropical fruit varieties. Mango has undergone considerable varietal differentiation. In India alone, over 100 named varieties are known. Apart from these, millions of seedling trees grow throughout the country, each of which has its own distinctive characteristics. A major portion of mango trees in Kerala are of seedling origin. Tender and mature but unripe mangoes are extensively used for making pickles and chutney. Ripe fruits are eaten as such. A variety of products are made out of this. They are canned mango slices, mango pulp, jam, juice, custard powder, ready to serve mango beverages, toffees etc.

This fruit is seen in most of the parts of India Especially in Kerala. The peculiarity of this fruit is that it it contains small throwns. For eating this fruit you have to remove the outer layer containing throwns. This fruit has a taste of sour and sweetness also. This is good for digestion and it is mostly used as juice. This is cultivated large scale in many places in Kerala.

The papaya is the fruit of the plant Carica papaya. It is a very large plant and has a single stem that grows to a height of around 5 to 10 meters tall. The leaves are seen only in the top of the trunk and are arranged in a attractive spiral manner. The ripe fruit is eaten whereas the unripe fruit of papaya is cooked and eaten. They are used to make curries, salads and stews. It has high amount of pectin in it that can be used to make jellies also. Some of the various uses of papaya are that it is used as a cooking aid, in medicine etc

The cashew is a tree which is native to northeastern Brazil. It is plenty in Kerala. We Export it to other countries. They are grown mainly for the cashew nuts and cashew apples. While processing cashew we obtain the cashew nutshell liquid which is rich in anacardic acids. This can be used effectively against tooth problems as they are harmful to the gram-positive bacteria. They also act best against many other gram-positive bacteria. The cashew nut is a favourite snack of all and they are consumed as such or lightly salted or sugared.

The fruit is known for its sweet, sour and astringent flavor. It is a large evergreen tree with white fragrant flowers and black fruit with pink juicy pulp. This fast growing tree lives for more than 100 years. The wood is strong and is water resistant. Because of this it is used in railway sleepers and to install motors in wells. This tree starts to flower in the months March to April every year. The The fruit is green and changes to a pink to shining black colour when it matures.. The seed has medicinal values and is used in ayurveda to control diseases like diabetes and also for digestive ailments. The leaves and bark are also useful for controlling blood pressure. Wine and vinegar are also made from the fruit. It is a high source of vitamin A and vitamin C.

Indigenous fruit trees like Sheema nelli that does not require much care and attention is a boon to every households. The tree often bears fruit twice a year, the first during April to May and then during August-September also. Star gooseberry fruit is known to contain extremely high amounts of natural vitamin C which is an antioxidant with potent anti-ageing properties. It has only one seed in each fruit. The flowers are male, female or hermaphrodite and are small, pinkish in colour and appear in cluster.

Guava trees are small shrubby evergreen trees, with a lot of strong bony like branches found in kerala. the main variety of guava cultivated and sold here is the apple guava. The fruits are fleshy and have a sweet taste. This fruit is rich in proteins, carbohydrates, calcium, phosphorus, iron, vitamin A, vitamin B3, vitamin B4. Natural propagation is by birds and small animals. Different parts of the tree have medicinal properties. The decoction of the leaves and bark of this tree are sued for treating various ailments such as diarrhea, dysentery, vomiting and sore throats, and also for regulating the menstrual cycles. The crushed leaves used when applied on wounds relieves pain.

It is one of the most commonly seen fruit in Kerala. It is white when it is not ripen. It turns rose and then red as it ripe. You can eat it even if it is not ripen, but it will be slightly sour. This fruit bearing tree grows a maximum of 6 – 7 meters. The fruit has seeds inside which is bitter in taste. Even though its juice is not common it is also very tasty.