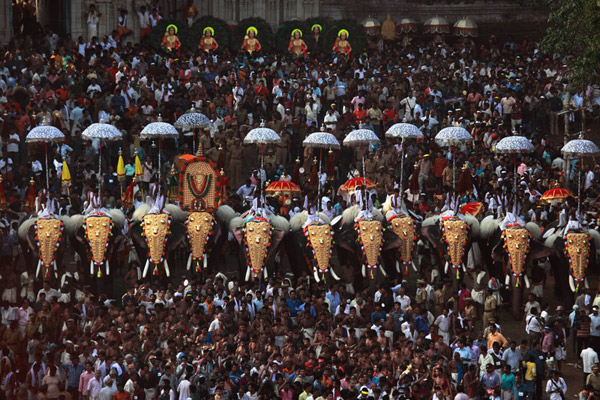 Thrissur is regarded as the cultural capital of Kerala, a
beautiful coastal region of southwest India with a history deeply rooted in the
spice trade.

Thrissur, the name derived from ‘Tiru-Shiva-Perur’ (the town
with the name of Lord Shiva) is the cultural capital of Kerala. The town is
built around a hillock top. Its most prominent feature is the Vadakkumnathan
Kshetram or temple which has Shiva as it presiding deity.

54 km long coastal area. South East corner of the District
is bounded by Tamil Nadu. Mountains-Machad, Paravattani, Palapalli, Kodeswary
& Athirapalli. The Periyar, The Chalakudy, The Karuvannur and The Ponnani
(Bharatha Puzha) are the main river systems in the District.

The Vadakummnathan temple is the most important attraction
of the city. The giantic temple and historical structures have more than 1000
years of tales to tell. However the temple allows only Hindu devotees inside
the complex and hence adherents of other religions can just have a glimpse from
outside or take a photo in front of the massive gate tower, constructed in true
specimen of Kerala architecture.

Named as Vadakkechira Palace, was reconstructed in
Kerala-Dutch style in 1795 by Sri. Ramavarma Thampuran of the erstwhile
Princely State of Cochin, well as Sakthan Thampuran(Greatest ruler of the
Cochin dynasty) is preserved by Archaeological Department.

It has a good collection of wood carvings, metal sculptures
and ancient jewelers.

It is a major attraction for children and students with a
variety of animals. There is a special building which houses snakes.

Basilica of Our Lady of Dolores

The 1875-built Roman Catholic Minor Basilica is locally
called Puthen Palli. The 140 ft long steeple is visible from anywhere in the
town. The chapel has 15 altars. It boasts of neo Gothic spires and the largest
interior of any church in South India with a lot of mural paintings on the
walls and ceilings.

This hillock has been converted by the tourism department as
an amusement park. While grown ups relish the scenic splendor from the hill
top. Children can relax and play to their hearts. Lot of people use this place
for their morning walk. Early in the morning walking to the top of hillock is a
good exercise. View from top of the hill is really good especially at the time
of sun rise and sun set. Now this place is under control of Thrissur District
Tourism promotion Council and they charge nominal fee for admission to
amusement park and parking the vehicle.

Guruvayur Sri Krishna Temple is a Hindu temple dedicated to
Lord Krishna, located in the town of Guruvayur in Thrisur .

Anakotta (aka anathavalam) is a unique place – a world of
elephants of different sizes and natures. Some are gentle and friendly, some
are indifferent while a few are aggressive enough to be severely restricted by
chains.

The most colourful temple festival of Kerala, Thrissur
Pooram attracts large masses of devotees and spectators from all parts of the
State and even outside. Celebrated in Madom (April-May) it consists of
processions of richly caparisoned elephants from various neighbouring temples
to the Vadakumnathan temple, Thrissur. The most impressive processions are
those from the Krishna Temple at Thiruvanbadi and the Devi Temple at
Paramekkavu which is quite a significant event for its devotees.

This festival was introduced by Sakthan Thampuran, the
Maharaja of the erst while Kochi State. Perhaps, there is no other festival in
Kerala that draws such an unbelievable number of people to a single event.
However Vadakkunnathan is a mere spectator at this festival, lending its
premises and grounds for the great event. The pooram festival is also well
known for the magnificient display of fire works. Fire works start in the early
hours and the dazzling display last three to four hours.

The Pooram Festival is celebrated by two rival groups
representing the two divisions of Thrissur Paramekkavu and Thiruvambadi vying
with each other in making the display of fireworks grander and more colourful.
Each group is allowed to display a maximum of fifteen elephants and all efforts
are made by each party to secure the best elephants in South India and the most
artistic parasols, several kinds of which are raised on the elephants during
the display. Commencing in the early hours of the morning, the celebrations
last till the break of dawn, the next day.

The procession of the Thiruvambadi Pooram to the grounds of
Vadakkumnatha Temple and back is not only important, but also quite enlivening.
The marvellous as well as magical effect of the Panchavadyam, a combination of
five precussion and wind instruments is to be felt and enjoyed.

This 80 feet high waterfall at the threshold of the Sholayar
ranges is a popular picnic spot. Two amusement parks, DreamWorld and
SilverStorm, are located nearby

Vazhachal, (a short drive from Athirapilly).

Close to dense forests and a part of the Chalakudy river.

23 km from city. It is very unique in being the largest
elephant park in the world with over 60 elephants.

It is a good picnic spot.

25 km. A sea shore for rare scenic beauty. Acknowledged as
one of the best beaches along the west coast.

It is in Cheruthuruthy and was founded by the Poet Sri.
Vallathol Narayana Menon, to encourage the study of the ancient arts of Kerala
such as Kathakali and Mohiniyattom.  edit

(30 km away, near to
Kunnamkulam, exactly 2.5 km from Kunnamkulam on Kozhikode road). This hill
station is also known as narimadakkunnu. This is a beautiful place. Many newly
married couples prefer this place for still and moving photography, while many
film makers also prefer this place for song scenes. Its a place of natural
beauty.and it is very attractive. a chola provided in the narimadakkunnu.

(Around 25kms away, in Thalikulam of Thrissur District in
Kerala State of India. It lies on the coast of Arabian Sea and attracts
domestic tourists in every season.