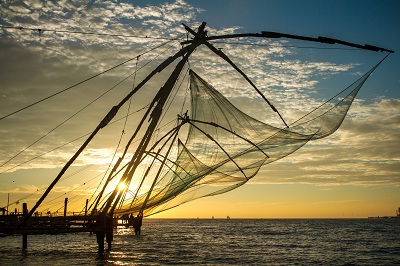 Ernakulam refers to the eastern one of the twin cities. Ernakulam – Kochi in Kerala, India. The city is the most urban part of Kochi and has lent its name to the Ernakulam district. Ernakulam is called the commercial capital of the state of Kerala. The Kerala High Court, the Office of the Corporation of Cochin and the Cochin Stock Exchange are situated here. Ernakulam was once the capital of the Kingdom of Cochin. It is located 220 kilometres (137 mi) towards north-west of the state capital Thiruvananthapuram.

Ernakulam is located on the coast of the Arabian sea with Kottayam and Alappuzha districts on the south, Idukki on the east and Thrissur on the north. The commercial capital and the most cosmopolitan city of Kerala, Kochi, in Ernakulam, is also known as the Queen of the Arabian Sea. With one of the finest natural harbours in the world, this was once a major centre of commerce and trde with the British, Arabs, Chinese, Portguese, Dutch etc.

The district is also home one of the holiest Hindu temples, the Thrikkakara temple, Chottanikara temple. Christianity and Judaism entered in to the Indian subcontinent through this district. The works of scholars and Eastern Christian writings claim Thomas the Apostle to have set foot in Muziris near here 2,000 years ago. (AD 51-52)

The city has served as an incubator for many Malayali entrepreneurs and is a major financial and commercial hub of Kerala. The city is also a big centre for shopping in Kerala for silks and gold jewelry.

Apart from being the commercial nerve centre of Kerala, it is also a major academic hub and is home to several educational institutions including the Cusat, Kerala Judicial Academy, Kerala Press Academy, Kalady Sanskrit University, NUALS and Bharatiya Vidya Bhavan.