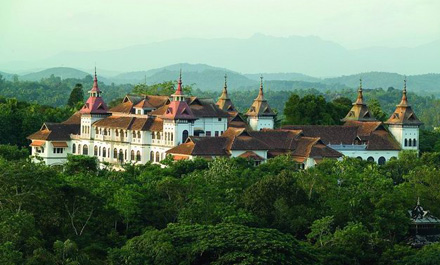 Trivandrum, the capital of the state of Kerala, the God’s Own Country, now known by the name.Thiruvananthapuram, literally translates into the “abode of Lord Anantha”. The Sri PadmanabhaswamyTemple, a highly venerated temple for Keralites, in the heart of the city is devoted to the deity Lord Anantha. The city of Thiruvananthapuram is located in the South of the state and bordered by Tiruneveli in the East, Kanyakumari to the South and Kollam district located to its North. The city is a must on the itinerary of any visitor to the South India.

The city being the capital is the center spot for the political activities of the State. The people of Kerala known for their leftist leanings have always supported the Marxist precepts of the CPI(M) or the Communist Party of India. The city is the hub of all the political upheavals in the state and is considered to be the most politically active. No wonder polls draw more than ninety percent of the polling percentage on a regular basis.

Agasthyakoodam is a prominent peak in the Sahyadri ranges of the western Ghat next to Anamudi.It is about 1869 metres above sea level. It can be approached on foot from Bonacaud which is 61 kms away from Thiruvananthapuram. The forest Department issues special pass for the entry with some conditions. Tradition says that the great sage Agasthya had his ‘Tapas’ there. In the period of British rule, there was a friction between the rulers of Travancore and tamil Nadu over the right of ownership of the place. The case was later trailed in a court in England and the Court orders infavour of Travancore. Allen Brown, an English Scientist had built an observatory there. Later it was ruined for lack of proper guard. The remains of it can be seen there now. Beautiful orchids and variety of plants are also found here in largenumbers. It being a home to certain birds and a seasonal dwelling to a huge set of certain migratory ones, this mountain attracts professional as well as occasional bird watchers. This legendary mountain can also be accessed on foot from Kotoor, Neyardam, and also from Bonacud. The ideal season for trucking is from December to April. This place is also noted for its abundant Ayurvedic herbs. The Government of Kerala has declared this area as biological park for the protection of bio-diversity.

Ponmudi, an idle hill station is popular for its green meadows, flowering trees, countless varieties of butterflies, slowly meandering streams and wet deciduous forest. A pleasant resort with an elevation of 3002 feet above sea level, is situated at the sour of western ghat. The pathways to this place are narrow. The atmosphere is cool, the ground is lush green and the place is woody. The air is filled with the fragrance of mountain flowers. Exotic butterflies can be spotted. Springs and small rivulets are enchanting and enlivening. There is a deer park close by. There are several tea and rubber estates around the hills, A hill tribe called kani live in the surrounding areas. Being fascinated by its enchanting charm, the Travancore rulers built two sanitorium here. Ponmudi, a famous place for trekking, is now developing as a hill resort with rooms and dormitory accommodation facilities. There is also K.T.D.C. restaurant and a Government guest house. It is 54 kms from Thiruvananthapuram and is easily reached by road.

Mankayam is 45 kms from Thiruananthapuram. It is situated near Palode in Nedumangad taluk and is 500 mts above sea level. A beautiful hill area surrounded with varieties of ever green trees and beautiful waterfalls. Lot of learning and entertaining materials related to nature has been arranged there for visitors. Convenient place for observation of nature, tracking arrangement have been constituted for interested visitors.

Veli is an ideal picnic spot, which has been developed as a tourist village. The placid Water of back water lake merges here with boundless blue of sea water A water front park with a wadding pool ,a floating restaurant ,aqua sports facilities, and beautiful gardens thrill children along with grown up people .Children can watch different varieties of back water fishes in the wadding pool Beautiful statue on the meadows and sculpture by renowned sculpture Kanayi Kunjuraman are the distinct features of veli. There are facilities for pedal boating, row boating. It gives an opportunity to enter the fantastic world of backwaters A visitor who sits by the side of lake will have the incredible experience. He enjoys the rhythm of lake when the small wave hits on its bank on boat racing .Floating Bridge is a new experience to those who visit there. Floating restaurant gives them an excellent opportunity to dine on the surface of water. Then they can pass through the floating bridge to the shore of Arabian Sea .The stretch of white sand and blue water give them the ingredients for relaxation. The youth hostel at veli provides in expensive dormitory type accommodation.

A lake, 53 kms from the city and 8 km north of Varkala, is a natural lake by the side of Arabian Sea. The white and blue sands on the beach are washed by surf, which roars and hisses at the feet of coconut palm.The view of the blue water playing in the chimes of bells of the wind on one side and the never ending spread of the green palm groves and the green veiled hill top on the other side, thrill the visitors most. A confluence of the sea, river and the backwater make the beach secluded, picturesque and worth visiting. The Priyadarshini boat club provides facilities of boating to the visitor

Your voyage of Kerala begins in Thiruvananthapuram, the capital of Kerala, where history has a character and royalty has a charm. A city where the beautiful shadows of the past coexist with the present. A city that is calm and yet teeming with vigour. A city where tradition and modernity coexist beautifully.