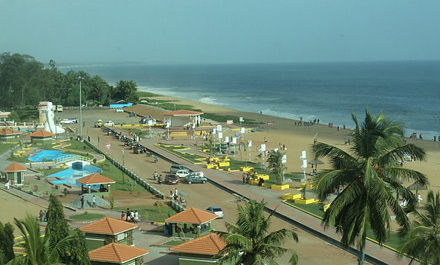 Kollam (anglicised name: Quilon, pronounced koy-lon) is a city in the Indian state of Kerala. The city lies on the banks of Astamudi Lake on the Arabian sea coast and is situated about 71 kilometres (44 mi) north of the state capital, Thiruvananthapuram. It is the headquarters of the Kollam district. Kollam is the fourth largest city in Kerala and is known for cashew processing and coir manufacturing. As the city lies on the shores of Ashtamudi Lake. It is the southern gateway to the Kerala Backwaters of Kerala and is a prominent tourist destination.

Kollam was formerly called Nelcynda and Thondis or tyndis. During the rule of the chera monarchy in southern Kerala, Kollam was the focal point of trade. Today, Kollam is a major business and commercial centre in the central Travancore region of Kerala.

Kollam, the capital of Venad 9th to 12 century AD
The Malayalam Era began in 825 CE; it is named ‘Kolla Varsham’ after Kollam, because of the importance of Kollam in the 9th century CE. Ayyanadikal Thiruvadikal granted the Tharisapalli plates copper plate grants in 825 CE to Nestorian Monk Mar S(abo)r Iso who he invited to Kollam, transferring to the Tarsish Church and the community in the St. Thomas tradition of Quilon.

Kollam during Portuguese, Dutch and British conquests (16th to 18th centuries)
The Portuguese were the first Europeans to establish a trading center in Tangasseri, Kollam in 1502, which became the centre of trade in pepper. In the wars with the Moors/Arabs that followed, the ancient church of St Thomas was destroyed. In 1517, the Portuguese built the St. Thomas Fort in Thangasseri, which was destroyed in the subsequent wars with the Dutch. The ruins of the Fort can still be seen in Thangasseri. In 1661, the Dutch took possession of the city. The remnants of the Dutch forts can be found at Thangasseri. In the 18th century, Travancore conquered Kollam, followed by the British in 1795. Thangasseri remains today as an Anglo-Indian settlement, though few Anglo-Indians remain. The Infant Jesus Church in Thangasseri, an old Portuguese-built church, remains as a memento of the Portuguese rule of the area.

Kollam as part of Travancore
Velu Thampi Dalawa of Travancore worked to improve Kollam. He helped build new markets and invited merchants and traders from Madras (now Chennai) and Tirunelveli to set up trade in Kollam. Kollam, to this day has a thriving business in cashew nuts, coir and spices.

The history of the district as an administrative unit can be traced back to 1835, when the state of Travancore consisted of two revenue divisions with headquarters at Kollam.

Geography
Kollam is bordered by the Pathanamthitta and Alappuzha districts on the north and the Thiruvananthapuram district on the south.