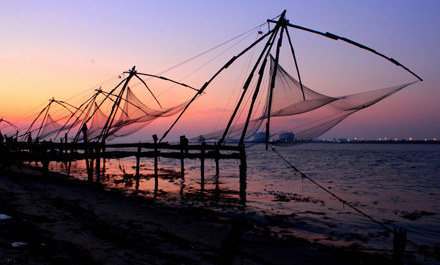 Formerly known as Cochin, this is one of the major port
cities located on the West Indian coastal areas. This city of the Ernakulam
district of the state of Kerala is situated by the side of the Arabian Sea.
Thus, this city is often referred as Ernakulam as well. This 2nd biggest city
of Kerala is considered to be the first ranked city in the state for attracting
national as well as international tourists. This vibrant city is known for
providing breathtakingly scenic view of the Kerala state. Apart from that, this
city is the industrial and commercial capital of this state of south India.

Places of Interest in Kochi

Being the best starting point to explore the beauty as well as the unfathomable
diversity of the Kerala state, this city of south India is, informally,
regarded as the “Gateway to Kerala”. The number of places of visit,
which are located there, just adds on to the fame of this tourist destination.
Following are some of those tourist spots in Kochi:

Bolghatty Island: Located within a short distance of boat ride from the city’s
mainland, this island houses the Dutch Palace, which has now been turned to a
hotel of K. T. D. C. (Kerala Tourism Development Corporation) and a small golf
course. This famous picnic spot offers a panoramic view of the harbor and the
port.

Cherai Beach: Positioned towards the northern end of the Vypeen Island, this
lovely sea beach is bordered by paddy fields and coconut groves. Swimming is
one of the common enjoyable activities in this beach of Kochin.

Fort Kochi Beach: This sea beach along the Kochi Fort is one of the best places
to provide a mesmerizing view of sunset in the city. The small beach stalls
serving mouth watering preparations of locally caught fresh fish are worth
exploring.

Hill Palace: This 19th Century palace of Kochi’s king has been transformed to a
museum that exhibits the crown, the throne and the different articles used by
the kings.

Jewish Synagogue: Built in the year 1568, this magnificent synagogue is
decorated with Belgian chandeliers and Chinese tiles.

Mangalavanam Bird Sanctuary: Situated beside the Kerala High Court, this bird
sanctuary is home to many rare and exotic species of resident and migratory
birds.

Mattancherry Palace: Even called Dutch Palace, this age old palace displays
some mural paintings that depict scenes from the Ramayana as well as the
Mahabharata, the two great Hindu epics.

Santa Cruz Basilica: Initially constructed in the year 1505, this Portuguese
church was re-structured in 1905 and was recognized as a basilica in 1984 by
Pope John Paul II.

St. Francis Church: Built by the Europeans, this is the oldest church in India
and is known for clearly marking out the burial spot of Vasco da Gama.

Vasco House: Featured with verandahs and windows with glass panes, this
architectural construction on the Rose Street is believed to be among the
ancient most Portuguese houses of the country where Vasco da Gama used to live.

Apart from these, names of some of the other tourist attractions in the city
are given below:

The huge industrial sector is the biggest resource of economy in this south
Indian city. The manufacturing industry has got around 37 % of contribution in
the city’s economy whereas, the sectors like hospitality, tourism and trade
together account for another 20 %. Some of the other major contributors to the
economy of this city are banking, chemical industries, construction,
electronics, export of fish, spices and seafood, hardware, import and export of
container cargo, I. T. (Information Technology) shipbuilding and shipping or
transportation. Remittances from the N. R. I population (Non-Resident Indian’s)
are another main source of income.

Kerala is the most educated state in India. The literacy rate of Kerala is about
94.3%. Kochi, one of the most important city of Kerala, excels in literacy rate
of the whole state. As far as preliminary education in Kochi is concerned, the
schools here are affiliated to either Kerala State Education Board, Indian
Certificate of Secondary Education or Central Board of Secondary Education. The
leading schools of Kochi are:

Many colleges of Kochi also offers technical courses. Some such colleges are
Model Engineering College, Center of Excellence in Laser and Optoelectronic
Sciences, Toc-H Public School, School of Communication and Management Studies.