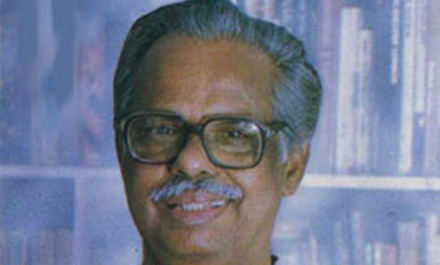 T. Padmanabhan (b. 1931), a distinguished short-story writer in Malayalam, has been writing since 1948, except for a brief period between 1963 to 1969. He has been credited with bringing the modern Malayalam short story nearer to the subjective intensity of the lyric. Many of his works have been translated into various Indian and foreign languages. It was when the short story reached a saturation point as a result of the repeated depiction of romantic idealism and social commitment that T. Padmanabhan emerged on the scene with a unique and highly individualistic idiom. Among his major works are Prakasam Parathunna Oru Penkutti (A Girl Who Spreads Radiance, 1955), Oru Kathakrittu Kurishil (A Story writer on the Cross, 1956), Makhan Singhinte Maranam (The Death of Makhan Singh, 1958) , Kala Bhairavan and Gouri (1993).