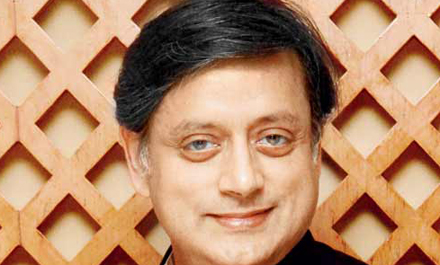 Shashi Tharoor is a prolific author, columnist,peace-keeper, refugee worker, human rights activist and a member of the Indian Parliament representing Thiruvananthapuram constituency in Kerala.He previously served as the United Nations Under-Secretary General for Communications and Public Information and as the Minister of State for the Ministry of External Affairs.

Tharoor has written numerous books in English. Most of his literary creations are centred on Indian themes and they are markedly “Indo-nostalgic“. Perhaps his most famous work is The Great Indian Novel, published in 1989, in which he uses the narrative and theme of the famous Indian epic Mahabharata to weave a satirical story of Indian life in a non-linear mode with the characters drawn from the Indian Independence Movement. His novel Show Business (1992) was made into the film ‘Bollywood'(1994).

Shashi Tharoor has been a highly-regarded columnist in each of India’s three best-known English-language newspapers. Tharoor began writing at the age of six and his first published story appeared in the “Bharat Jyoti”, the Sunday edition of the “Free press Journal”, in Mumbai at age 10. His World War II adventure novel Operation Bellows, inspired by the Biggles books, was serialized in the Junior Statesman starting a week before his 11th birthday. Each of his books has been a best-seller in India. The Great Indian Novel is currently in its 28th edition in India and his newest volume.The Elephant, the Tiger and the Cellphone has undergone seven hardback re-printings there.