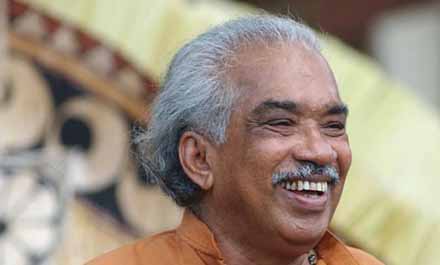 Childhood experiences of Kadammanitta Ramakrishnan imparted strong influence in his literary work. With his powerful and mind provoking poems he became one of the voices of rebellion in modern Malayalam literature.His work has been widely appreciated for its force, energy and folk touch and gave a mass appeal and popularity.He was awarded the Kerala Sahithya Academy award in 1982.

After his degree studies, he went to Kolkata, and then reached Chennai. He was employed with the Postal Audits and Accounts department in 1959. He worked in Thiruvananthapuram from 1967 till his retirement in 1992.

During his college days, he was involved with the student federation as well as communist party. In 1992 he became the vice president of Purogamana Kala Sahitya Sangham (Progressive Association for Art and Letters), and in 2002 its president.

Kadammanitta bagged the Asan Prize and Kerala Sahitya Akademi award in 1982, New York-based International Malayali Foundation award in 1984 and Oman Cultural Centre award in 1986.He was elected to Kerala assembly in 1996 from Aranmula segment after his retirement from Postal Audit Department.