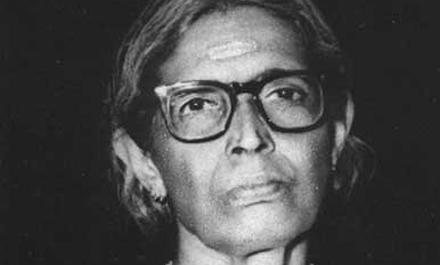 Balamani Amma (19 July 1909 – 29 September 2004) was a Malayali poetess.She is called the grandmother of Malayalam literature .She had written about 500 odd poems ,she had won prestigious awards like Saraswathi Samman and Padmabhushan .Some of her important works are Koopukai, Amma,Nivedyam, Sopaanam and Lokantharangalil.She was interested in astrology, Indian philosophy of India and had written many poems on bhakthi/gnana and karma. Nivedyam is the collection of poems of Balamani Amma from 1959 to 1986.

Kamala Das ,daugther of Balamani Amma,has translated one of her mother’s poems “The Pen” into English,which describes the loneliness of a mother.Balamani Amma was influenced by her uncle Nalappat Narayana Menon, Vallathol, Guru Cheruliyil Kunhunni Nambeesan, and by the Theosophical movement of India and Mahatma Gandhi.The poetry of Balamani Amma is filled with philosophical thoughts of India and is enriched with the love for entire humanity. Her poetry on the love for children and grandchildren earned her the title of Mother/grandmother of Malayalam poetry.