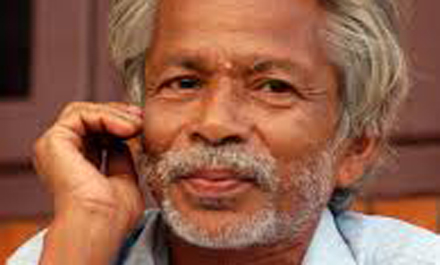 A Ayyappan ( 27 October 1949 – 21 October 2010) born in Balaramapuram, Trivandrum district was a noted Malayalam modernist poet. He was well known for his heart touching poems and his bohemian lifestyle. His collections include Maalamillatha Pampu, Onakkazhchakal, Budhanum Aattinkuttiyum, Karuppuveyil Thinnunna Pakshi, Yangjam, Ente shavapetti chumakunnavarodu, Tettiyodunna Secondu Soochi and Sumangali.Apart from this he had penned hundreds of small poems for periodicals.
His poems were celebrated for their intensity, meditative beauty and pungent romance. In 2010 Ayyappan was honoured with Kumaran Asan Poetry Prize and in 1999 Kerala Sahithya Akademi Award.
He Started his career as proof reader and copy editor for a Book House and later Ayyappan launched his own publication Aksharam in the ’70s which was noted for its modernist orientation. After Aksharam was wound up, Ayyappan began his long journey through life and writing and emerged as one of the most noted poets of the last few decades.He had worked with CPI mouthpiece ‘Janayugom’ for a short period.Ayyappan was very popular among the poetic fraternity and the young generation of poetry lovers.