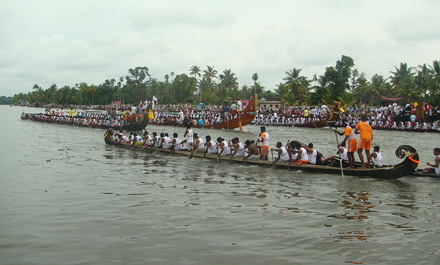 Rajiv Gandhi Trophy Boat Race or Pulinkunnu Rajiv Gandhi Boat Race is conducted at Pulincunnoo every year to commemorate the visit made to this place by the late Prime Minister of India Shri.Rajiv Gandhi with Soniya Gandhi in 1985.The race is held at Pulincunnoo, the heart of Kuttanadu ,10 km away from the Alleppey town in the memory of the Late Mr. Rajiv Gandhi, the former Indian Prime Minister.Pulinkunnu Rajiv Gandhi Boat Race is held two weeks after the Nehru Trophy Boat Race during the month of August-September.This event Offers tremendous publicity potential, as about one lakhs people are witnessing it directly and many lakhs vicariously through print and visual medias.

The race is conducted by the Rajiv Gandhi Trophy Boat Race club which is Registered No. 404/91 under the Charitable and Religious Societies Act and is nonprofit seeking body. In addition to the competitions, there will be an exhibition of ancient and traditional forms rowing such as “Vechupattu Thuzhachil” and “Karakkikuthu Thuzhachil” by three snake boats. These types of rowing which are now becoming extinct, will be an added attraction.Most of the boat races are organized by Government Officials with little public participation and a lot of red tapism is visible everywhere.