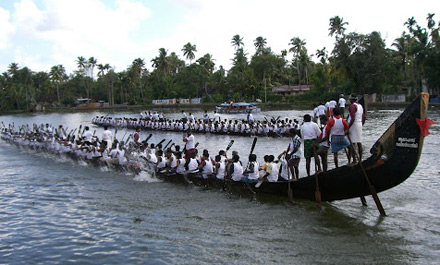 The Legend behind this boat race festival is an interesting one. The residence of Haripad Village decided to build a temple. It was then that all the land lords, at the same time got the information regarding the existence of an idol in their dreams. The four-handed  idol (Chathurbahu) which had been used by Parasuram (there is the famous legend on the birth of Kerala associated with Parasuram) for Poojas, was deposited in the kayamkulam lake. In obedience to this vision, the land lords along with divers and swimmers from the village rowed to the lake but how could they locate the idol in such a huge lake?. They had sign of pooja flowers in a whirlpool in the lake and retrieved the idol at Kandalloor in Govindamuttom backwaters (Kayal) .

The Subrahmanya idol was brought to shore at “Nelpurakadavu” accompanied by the several country boats of the locality in great fanfare. There is aSubrahmanya Swami temple Haripad tradition that this idol was kept for public viewing half an hour (Ara Nazhika) at this place under a Banyan tree which belonged to one Christian family named Tharakanmar. And even today there exist a small temple at this place known as “Ara Nazhika Ambalam”. This idol was then installed in the Haripad temple, amid much jamboree. The Subrahmanya Idol with four arms is said to be the biggest of its kind and designed after the sculptural pattern of the Buddhist Era. In commemoration of this great event, the people of the villages around Haripad Celebrate “Vigraha Labdhi Jalolsavam” (water festival commemorating  the retrieval of the idol). This is carried for 3 days after Thiruvonam in Payipad River. The people who are participating for this celebration come in groups singing Vanchipattu, offering Vazhipadu on Thiruvonam day then only the Avani Festival Arattu Ezhunellathu in Chinga Masa will start in the temple.

The Payipad Boat Race is held in the festive Onam season in the auspicious month of Chingam (Chingam month commences around mid – August of the English calendar) per the Malayalam calendar. This Boat Race is unique as it is the only Boat Race held for three days continuously (Thiruvonam, Avittam, Chathayam days of Chingam month). Payipad is a sleepy village of Veeyapuram which is the confluence of the rivers Pampa and Achalkoil. This sleepy village suddenly comes to life in the Onam season for the Boat Races and becomes a great tourist attraction. The Payipad boat race is held on the Payipad river which is a tributary of Achankoil river.
Features
Payipad and adjoining areas may be described as the ancestral home of the Kerala snake boats. Payipad Boat Race has the largest participation of snake boats after the Nehru Trophy since eight snake boats are owned by “Karas” (villages) around Payipad and are affiliated to the Payipad Jalolsava Samithy. There are another four snake boats hailing from this locality which are owned by individuals or groups of individuals. These include 13 times Nehru Trophy winnwer Karichal (Village on the southern Bank of Achenkoil river with Payipad as its immediate neighbor on the Northern side of the river), Payipad, Vellamkulangara, Cheruthana and Ayaparampu Valiya Diwanji. A few invited Palliyodams also participate in the races to add great colour to the water festival.

Vellamkulangara  chundan may soon move to London to set the Thames on fire and be part of the inaugural ceremony of the 2012 London Olympics. The Kerala snake boats and the Payipad Boat Race will become even greater international attraction thereafter.

The other unique features of the Payipad Boat Race (besides the long history, the large participation of snake boats and that it is the only three day water festival in Kerala) is that it is a people’s event where the villagers come together to pool all their energies for the good conduct of the races, irrespective of caste/religion, economic status or political affiliation. The races are funded from benevolent donations and sponsorship. This is also one of the three traditional boat races recognized by the Tourism Department of the Government of Kerala and Officially publicized in their website and offices.