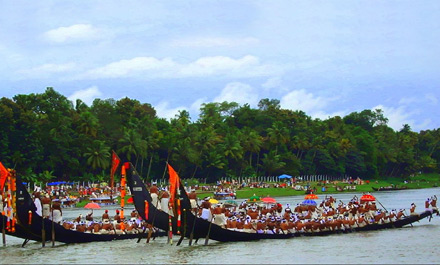 The most famous boat race of Kerala, the world-renowned Nehru Trophy Boat Race is held at Punnamada Lake in Alappuzha on the second Saturday of August every year. The highlights of these spectacular races are magnificent snake boats or Chundanvallams and its boisterous and rhythmic boat songs known as Vanchipattu. Nehru Trophy Boat Race is the biggest and the most famous event. This year the event falls on 9th August 2003. The first race was an impromptu one conducted in 1952 in honor of Pandit Jawaharlal Nehru who visited Alappuzha. Pandit Jawaharlal Nehru was so thrilled and excited by the event that on his return to Delhi in December that year, he donated a silver trophy, which is a replica of a snake boat placed on a wooden abacus bearing the following inscription above his signature – ‘To the winners of the boat race which is a unique feature of community life in Travancore – Cochin.’

This trophy later came to be known as Nehru Trophy, and now the Nehru Trophy Boat Race is held every year to commemorate his visit to the place. The boat clubs and the boat race lovers spend lakhs of rupees for making this performance even more interesting and to win the trophy is considered a matter of pride and prestige. 18 snake boats will take part in the race this year and the 1370 meters long racecourse is divided into various tracks in such a manner that as the boats advance through these tracks, they appear like the fast moving snakes.