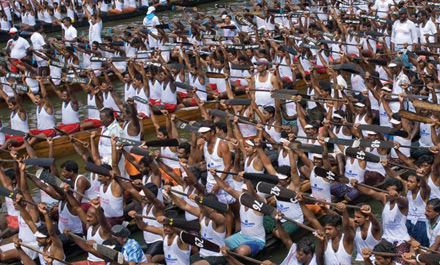 Kerala is well-known for its water bodies that take the form of canals, backwaters and rivers. And there are regions in Kerala, where water dominates life of those living in its vicinity. The southern district of Alappuzha is one such region in Kerala that takes the credit of having a great amount of area under water. Some of the rivers rising in the highlands of the Western Ghats, flow down to join the vast stretches of backwaters and canals that crisscross the heart of Alappuzha and the nearby region of Kottayam.

The backwaters of Alappuzha support a rich wealth of fish and are also home to several species of life forms, both inside and outside the water. Birds, both local as well as migratory ones, find these water bodies ideal for feeding, nesting and breeding. The local people look forward to these water bodies for food in the form of a variety of fish and also for livelihood.

There are many villages in Alappuzha that are set amidst an ocean of greenery and the placid backwaters. Traveling through the backwater villages, especially the ones in Alappuzha, one would be treated to vast stretches of paddy fields, groves thick with tall, swaying coconut trees and several trees; both big and small dotting the sides of the backwaters and canals with their branches leaning over the water. And in this milieu of verdure and water one can also spot the ubiquitous country boats of various sizes and shapes. There are boats that range from small canoe-sized dugouts to giants like the rice barges used chiefly for transporting goods and to the exceptionally long ones called the chundans which are used for boat races in the region.

Talking about boat races and Alappuzha, we are getting close to the riveting annual boat race and one of the popular races in and around Alappuzha – the annual Champakulam boat race. Scheduled to take place on June 26 this year, Champakulam boat race marks the beginning of the season for boat races in Kerala. Named after the serene village of Champakulam, which by and large has an agrarian community, this race is held on the course of River Pamba. Since the morning of race day, one could witness here local people turning out in large numbers and also visitors from far off places, including travellers to Kerala. People of all age groups would be seen hurrying up and down the river banks to occupy the best possible of positions to view the race. And still others could be seen struggling to get an elbow space and craning their necks to catch a glimpse of the race course. The snake boat race is often considered as the ultimate test of endurance, speed and skill in this region and rowers numbering about 90 to 100 on each boat undergo rigorous training for several days, prior to participating in the race.

In the afternoon, boats from nearby regions assemble at the starting point of the race, which is later followed by a procession of participating teams and cultural shows. By late afternoon, boats of various categories like the chundan (snake boat), veppu, iruttu kuthi, churulan and others would line up for their heats leading to the final race in each category. Among the category of boats, the snake boats are the cynosure of all eyes and thus become the main attraction for the cheering thousands, especially during the final race.

The gracefully flowing waters of the Pamba become a track on fire, once the majestic snake boats set their pace. As these boats glide elegantly and swiftly and past the elegant Champakulam Church the scullers of each boat try their best to outsmart the other teams and there would be occasions when the spectators would have a great time enjoying some real good photo-finish sessions. So this June, work an itinerary to be at Champakulam. Experience the real essence of a backwater village and take in the very best of a boat race that is bound to redefine your levels of excitement.