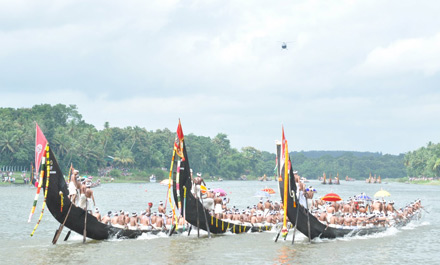 The two-day Aranmula Boat Race is more a water fiesta than a competition, conducted during Onam. The event is actually a re-enactment of the legendary Brahmin who made a votive offering of feeding one pilgrim a day. One day Sree Krishna himself appeared to him and the overjoyed Brahmin vowed to offer 51 measures of rice and all the provision for the Thiruvona Sadya (the sumptuous Onam feast) at the Aranmula Parthasarathy Temple. However, the rivals from another village tried to stop the Thiruvonachilavu Thoni (the boat carrying the offerings) but the Brahmin’s own villagers came to the rescue on snake boats.

Since then, a fleet of Palliyodam (a large, luxurious snake boat used by gods and royalty) carried the offerings as a security measure. Today, the number of snake boats has reduced from some 48 to 26 and it has evolved into a colorful water carnival with an imposing effigy of Sree Krishna is taken out in procession on the lake with children dressed as nymphs and princesses. On the second day, snake boats decorated with silken parasols, carrying helmsmen, oarsmen and singers assemble near the temple early in the morning and then move away in pairs, creating a magnificent pageant. The boat race proper is held in the afternoon.