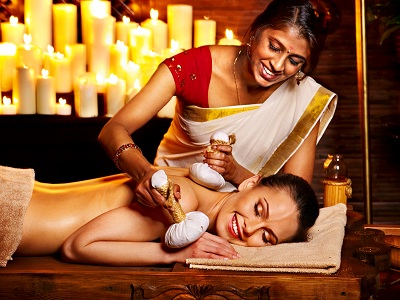 Njavarakizhi can be considered as a contribution of Kerala to the field of Ayurveda. It is a method of treatment based on fomentation in which four boluses of a type of paddy (called Njavara, hence the name Njavarakizhi) with medicinal value is cooked in milk and a herbal decoction from  Sida rhombifolia (Kurumthotti in Malayalam). Usually there are two masseurs who start fomentation in an identical manner one from each side. The movement of hands has to be always from upward downwards and the Kizhi has to be kept always at a constant tempareture.There are mainly 7 positions in which the patient has to be during the fomentation process. Once the procedure has been carried out for the required amount of time, the medicinal paste is wiped off with palm leaf scrapers and the patient can bathe after applying oil on the body.

Njavarakizhi is used in the treatment of rheumatism, arthritis and other neuro-muscular disorders as well as for general rejuvenation of the body.