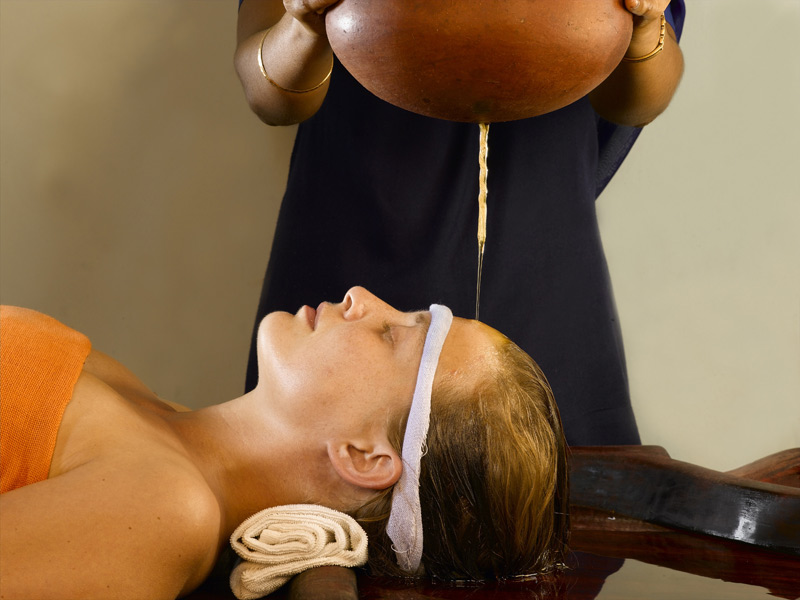 The Ayurvedic Therapy of Dhara has gained enormous reputation over the past few years among the urban section of the population of not only India but also of the rest of the world. The benefits that Dhara Therapy has brought desired results to the umpteen numbers of individuals who thus have made it one of the most Popular Ayurvedic Therapies.
Dhara is primarily applied to treat ailments like:

The process in which the therapy is applied on individuals is also interesting. At first, some oil is applied on the person’s head bearing in mind the resistance level of the person. In fact, this step is a prerequisite for almost all the Ayurvedic Therapies in India.

Next a headband which is also called the ‘vartti’ is tied just above the level of the ears in order to prevent the oil from flowing into the eyes which may cause irritation. The person is then made to recline with his back placed on the droni with the head positioned to face the ceiling. Such a position of the head is vital since it would enable the steam from the vessel to fall exactly at the center of the forehead and then flow down the locks.

Then oil with all its necessary ingredients is poured on to the forehead of the person by the therapist. As the oil starts to trickle down, the wick starts to descend on the patient’s forehead. When the oil is poured completely, the therapist gently makes to and fro movements of the vessel to ensure that the oil moistens the entire region between the temples which is then gently massaged.

Dhara usually takes time duration of 25 to 75 minutes. However, the duration varies according to the severity of the diseases or ailments.

The major ingredients of Dhara include the following:

Sometimes, buttermilk may also be used for other kinds of Dhara which include:

Thus, with all its variations, Dhara is fast becoming one of the most sought after remedy for a large number of diseases of both body as well as mind.

Panchakarma is a process of cleansing of the entire human body internally and this process is divided into five steps, namely Vaman, Virechan, Anuvasan, Niruhan, and Navan/Nasya. Sirodhara on the other hand is the process of calming the mind and expanding consciousness by continous pouring of warm oil to the forehead for 25 minutes or so. This relaxes the entire body. Lastly, nasya drops are administered to the nasal passage, which helps in removing residual doshas and toxins from the head and neck area.