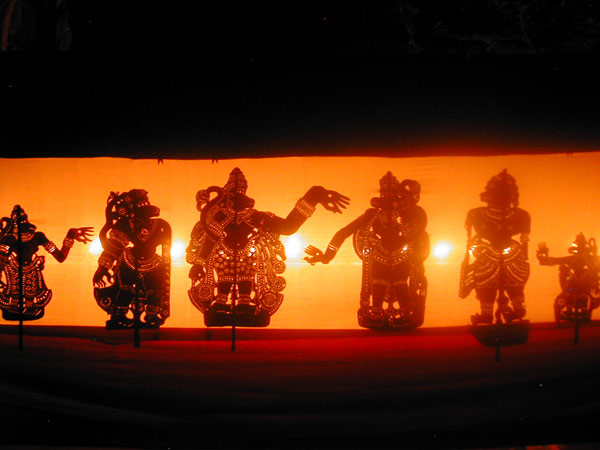 Tholpavakoothu literally meaning ‘leather puppet play’, is a ritual art performed during the annual festivals in the Kaali temples of Palakkad district. The theme of the play is based on the Kamba Ramayana, narrated in a diction that is a mixture of Malayalam and Tamil dialectical variations. The play covers the whole gamut of events from Lord Sree Rama’s birth to his coronation as the King of Ayodhya. The shadow play is presented in the ‘Koothumadam‘, a specially constructed oblong play house on the temple premises.

The puppets are fashioned out of the hides of buffaloes and deer, the former for evil characters and latter for noble ones. Each puppet is of an average height of 80 cms and is cut out in different postures. The puppets are arranged behind a long white curtain stretched across the Koothumadom. Behind this, on a split bamboo pole, is placed a row of wick lamps burning inside coconut halves. The light from these lamps cast the silhouettes of the puppets on the curtain. The chief puppeteer is known as ‘Pulavan‘. At present this ritual art is confined to Ottapalam and Kavalappara in Palakkad district.