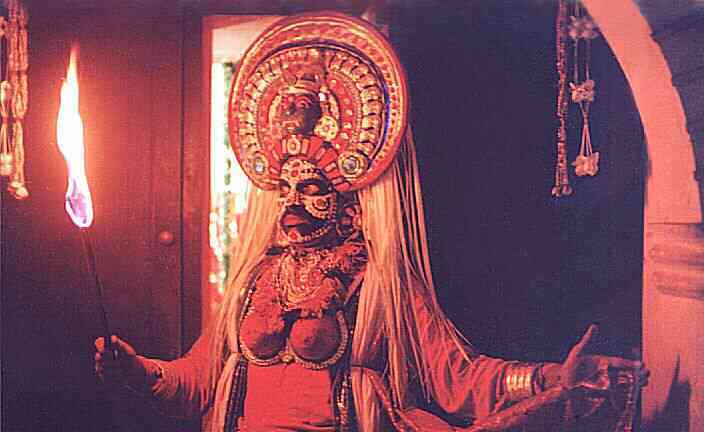 The land of Kerala has given birth to quite a lot of cults and cultures. To untwine these cults from the culture, religion, land and people of this state would be an unattainable task for such is the synthesis obtained by all these entities. Theeyattam or Theeyattu is such an ancient and multihued cult the genesis of which is untraceable in the pages of history.

A traditional ritual in dance form theeyattam is performed by the members of Theeyaattunni or Thiyaadi Nambiar community in Kerala. Bhadrakali Theeyattu and Ayyappan Theeyattu are the two types of theeyattam.

Bhadrakali Theeyattu is a ritualistic dance usually performed in Bhadrakali temples and in the households of namboothiri and theeyattunni communities. The ritual starts with the ceremony of kalamezhuthu, ritualistic drawings in colourful powder. An elaborate picture (kalam) of Goddess Bhadrakali is drawn on the floor using natural colours strictly following guidelines on pattern, details and dimensions. The materials used are rice for white, charcoal of husk for black, turmeric for yellow, mixture of lime and turmeric for red and green leaves for green colour. When lighted oil lamps are placed there emanates an awe inspiring image of goddess Bhadrakali.

Following this is a three-hour long song praising Bhadrakali. The dance parts usually commence at night which is performed by a male theeyattunni. He enters the stage with elaborate dressing and a huge headgear is placed on his head which ascribes him the status of goddess Bhadrakali. ‘She’ narrates the story of the battle with Darika to Lord Shiva who is her progenitor. Lord Shiva is symbolized by a huge lighted lamp.

The performance, which progress through chants, dance and gestures, reports the incidents leading to the killing of Darika. The performance concludes with the enacting of the assassination of Darikasura, representing the destruction of evil.

Bhadrakali theeyattu is performed mostly in the south and central districts of Kerala including Pathanamthitta, Alappuzha, Kottayam and Ernakulam.