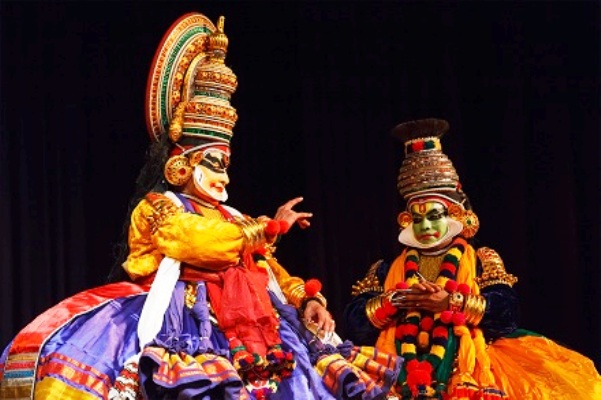 Kathakali is a highly stylized classical Keralite Dance Drama noted for its attractive make-up of characters, their elaborate costumes, detailed gestures and well-defined body movements presented in tune with the anchor playback music and complementary percussion. It originated in Kerala during the 17th century AD and has been updated over the years with improved looks, refined gestures and added themes besides more ornate singing and precise drumming.

Kathakali originated from a precursor dance-drama form called Ramanattam and owes it share of techniques also to Krishnanattam. The word “attam” means enactment.

Ignoring the first phase when it was Ramanattam, Kathakali had its cradle in Vettathunadu. Here VettathuThampuran, KottayathuThampuran (This Kottayam is in Malabarand many dedicated artists like ChathuPanicker laid foundations for what is known as Kathakali now. The KottaythuThampuran composed four great works, viz. Kirmeeravadham, Bakavadham, NivathakavachaKalakeyavadham and Kalyanasaugandhikam. After this the most important changes in Kathakali were brought about through the effors of a single person namely, Kaplingad Narayanan Nambudiri (1739-1789). He was from the Northern Kerala, but after basic instructions in various faculties of the art in VettathuKalari he shifted to Travancore.

The use of Malayalam, the local language (albeit as a mix of Sanskrit and Malayalam, called Manipravalam), has also helped the literature of Kathakali sound more transparent for the average audience.

Traditionally there are 101 classical Kathakali stories, though the commonly staged among them these days total less than one-third that numbers. Almost all of them were initially composed to last a whole night. Thus, many stories find stage presentation in parts rather than totality. And the selection is based on criteria like chorographical beauty, thematic relevance/popularity or their melodramatic elements. Sure, Kathakali is a classical art form, but it can be appreciated also by novices-all contributed by the elegant looks of its character, their abstract movement and its synchronisation with the musical notes and rhythmic beats.

The language of the songs used for Kathakali is Manipravalam. Even though most of the songs are set in ragas based on the microtone-heavy Carnatic music, there is a distinct style of plain-note rendition, which is known as