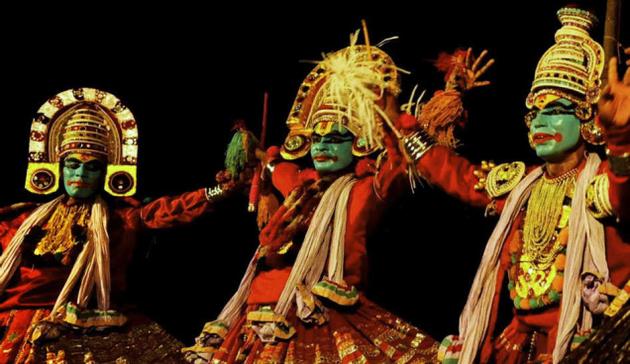 ARJUNA NRITHAM (the dance of Arjuna) is a ritual art performed by men and is prevalent in the Bhagavathy temples of Kerala. Arjuna, the most valiant of the five heroic brothers – the Pandavas – of the epic Mahabharatha, was also a renowned singer and dancer and is said to have propitiated goddess Bhadrakaali by a devotional presentation. Arjuna nritham is also called Mayilppeeli nritham as the costume includes a characteristic garment made of mayilppeeli (peacock feathers). This garment is worn around the waist in a similar fashion as the uduthukettu of Kathakali.

The performers have their faces painted green and wear distinctive headgears. The all night performance of the dance form is usually presented solo or in pairs. The songs which are strictly rhythm based are called Kavithangal and deal with various themes of the Puranas (ancient Hindu scriptures). Each Kavitham is composed to suit a specific rhythm. Before each song the dancers explain the intricacies of the particular rhythm about to be employed and how this rhythm is translated into dance movements. The various dance movements are closely similar to Kalarippayattu techniques. Percussion instruments like the chenda, maddalam, talachenda and ilathalam (cymbal) form the musical accompaniment.