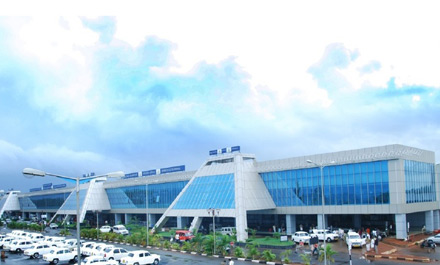 Calicut International Airport (IATA: CCJ, ICAO: VOCL), also known as Karipur Airport, is an International Airport serving the cities of Kozhikode and Malappuram in Kerala, India. The airport is located in Karipur about 25 km (16 mi) from Malappuram and 28 km (17 mi) from Kozhikode. The airport serves as an operating base for Air India Express. It is thirteenth busiest airport in India in terms of overall passenger traffic. The airport was given international airport status on 2 February 2006.[5][6] It is the third busiest airport in Kerala after Kochi and Thiruvananthapuram.

A 15,000 m2 (160,000 sq ft) international terminal has been opened to passengers, similar to the spacious modern international departure terminal that became operational on 14 May 2007. Three conveyor belts have been installed at the arrival terminal. The approach to Calicut airport runway is surrounded with hills and valleys. The approach funnel area of the runway 28 is a 30 m (98 ft) to 70 m (230 ft) deep undulated valley up to a distance of 6,000 m (20,000 ft), immediately following the tabletop runway of 2,860 m (9,380 ft) long. This terrain needs a special type of approach guidance lighting system to enhance safety for aircraft operations both during night and poor visibility conditions. Airports Authority of India have provided runway lead-in lighting system for the first time in India at Calicut airport as per the recommendations of the DGCA.