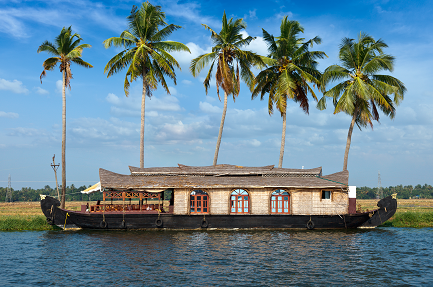 A leisure cruise along the palm-fringed backwaters of Kerala in a luxury houseboat is the most enchanting holiday experience among travellers today. A houseboat ride takes you past ancient Chinese fishing nets, water lilies, lush paddy fields, coir villages, rustic homes, ancient temples and coconut groves.The “kettuvallams” come with all modern comforts and services that include well furnished rooms and cabin crew at your service.

Houseboats are huge, slow moving, exotic barges designed for sheer leisure trips. Formerly, houseboats were used to ship rice, spices and other goods between Kuttanad and the Cochin port. It was a three-day affair those days. A standard houseboat, which could be about 100 feet long, can hold up to 30 tons, and that is as much as three big lorries can.

A houseboat which is made of hundreds of fine but heavy-duty planks  of jack-wood is held together absolutely by coir knots, the  specialty being that not a single nail is used. Kettu means knot in the local parlance and Vallam is boat. This framework is then coated with a caustic black resin extracted from boiled cashew kernels. And it lasts for generations.

1. Chundans (Snake boats) : The present state of Kerala was once ruled by many Kings and it was divided over more than 5 regions. The Chempakasseri King, ruler of the Kayamkulam area was using the CHUNDAN VALLOM as his war ship in many a battles. He was the one who had for the first time constructed the Chundan vallom and used it for war purposes. He won many wars with these. To support this Chundan vallom (warship) in the battles, he had started building other types of valloms/boats too. Details of these other valloms / boats are follows as belows.

3. Iruttukutty: It is also known as Vadakkan Oddy and they were much faster and the pirates started using it in the lakes. It did not make much noise while moving over the waters. The comparatively high speed and the low noise soon made it one of the most attractive ones for the pirates in the ancient times.

4. Thekkan Oddy This is a very beautiful boat with its nose like Churulan and its stern like Chundan. It is called Thekkan Oddy. In most of the boat races; especially in the famous Nehru Trophy Snake Boat Race at Aleppy these are used. The Thekkan Oddy boats are primarily reserved for the boat race of women.

5. Churulans: These are very unique type of boats that are pushed through the water with the help of poles, instead of the traditional oars. These are used by rich people while travelling. Long and thin bamboo poles used to move the churulans in the water. The oars men use these bamboo poles and they push it down and move from front to back and again.

6. Palliyodams: This type of boats have huge sterns than Chundan. The nose of the Palliyodams is much higher and helps it in moving much faster.

Vimalagiri Cathedral in Kottayam is one of the significant cathedrals under the Diocese of Vijayapuram.…

Elaveezhapoonchira, A Beautiful Valley in Kottayam

Elaveezhapoonchira is a beautiful valley situated in Kottayam district. It extends to over several acres…