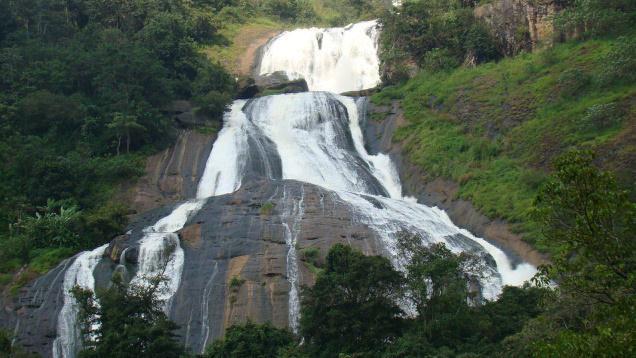 Udumbanchola is a taluk in Idukki district of Kerala state in India.
This is in the high-ranges. This taluk borders Tamil Nadu state.

The Karithode waterfalls in the tenth ward of Udumbanchola gram panchayat in Idukki district mesmerises visitors. The Karithode falls, less steep when compared to other waterfalls, have three layers which are stretched over an area of more than 350 feet. The top of the falls can be reached easily.

It is a hidden treasure for nature lovers who want to spend time away from the routine life. The area may not offer the best facilities; but there are many regular visitors who choose the spot for its offbeat charm.

The stream is in full strength owing to the monsoon, and local people say that the fall is near full strength for almost seven months and attracts visitors even during the summer.

The Parathode river’s name is being changed to Karithode falls, and could be developed as a stop-over for tourists visiting Munnar and Thekkady. This water fall is 13 km from Nedumkandam on the Munnar-Thekkady route. Considering its tourism potential, the Nedumkandam gram panchayat had constructed a 10-km-road, though the rest of it is in a not motorable. This does not stop the trekkers who visit the falls.

With the completion of the construction work of the Mavady-Perinchamkutty road, the falls will become a potential tourism spot, says Unni, a local resident. Local residents have submitted a proposal to the panchayat to make a motorable road up to the waterfall.

Though other tourism spots are identified for development, Karithode remains a hidden spot that is not mentioned in the long list of lesser known tourism places in the district.

Earlier, there was a proposal to make it a mini hydropower unit. Though 12 acres of land had been acquired for the project near here and fenced in 2006; no follow-up action was taken.

Once it is developed as a hydropower station, it will become inaccessible to visitors and so, the local people want to keep its natural beauty intact.

Town:
Udumbanchal and its major tourist spots are located on Munnar-Kumily highway. There are a number of frequent bus services available.
Airport:
The nearest international air ports are at Madurai and Kochi.
Railway Station:
Nearest railway station: Kottayam, about 85 km away from Udumbanchola.
District:
Idukki
Longitude:
9.900000
Latitude:
77.177432

Attukad Waterfalls are an ideal picnic spot to just sit and relax. Its is located…

Marayoor is a scenic rain shadow village in Idukki district, on the eastern slopes of…

Kolukkumalai Tea Estate holds an impressive prime. It is the highest located tea estate in…