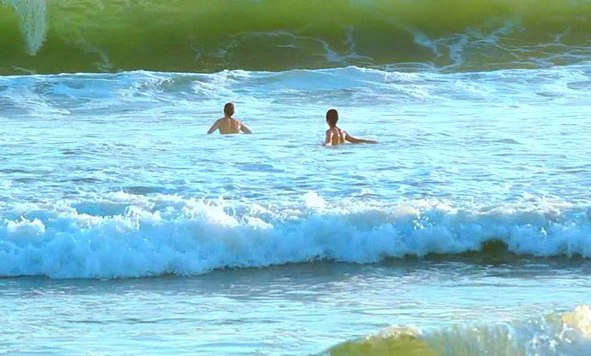 Located 16 kms from the main town of Kozhikode, the sandy Kappad beach is one of the most charming beaches of Kerala, also popular for its historic significance. After travelling around the coast of Africa by ship, Vasco da Gama, the Portuguese explorer landed on Kappad beach on 27th May 1498. He landed with 170 men in 3 vessels after undergoing many weeks of travelling.

A solitary pillar commemorates the event with the inscription, “Vasco da Gama landed here, Kappakadavu, in the year 1498″. This opened up the famous sea route for trade between Europe and India and Malabar soon became the gateway of east.

The pleasant and calm beach of Kappad in Kerala, locally known as Kappakadavu, is studded with rocks and is an ideal adventure destination. An intriguing feature of this beach is a sprawling rock that protrudes into the sea and has a temple on it.

The temple is believed to be 800 years old. Kappad beach is a small walk on the Korapuzha river, and even after 500 years, it remains untouched and unruffled, making it one of the most serene and peaceful beaches in Kerala, south India.

This little sea faring town of Kappad in Kerala, with its pleasant beach, is no less than a haven to the tourists visiting it for adventure. The best route to Kappad,Kerala is along the backwaters.

Un-spoilt and un-crowded, the scenic backwaters of Kozhikode offer a bewitching experience. A ride down the backwaters through the Korappuzha river brings you to the beach of Kappad in Kerala.

The beach here offers opportunities for sand castle building and other beach activities and adventure. During high tide, the beach is only 30 meters away from the sea, while on low tide, this increases to around 80 meters so take local advice before entering the sea.

Kappad finds mention in history and geography texts as the gateway to the Malabar coast.