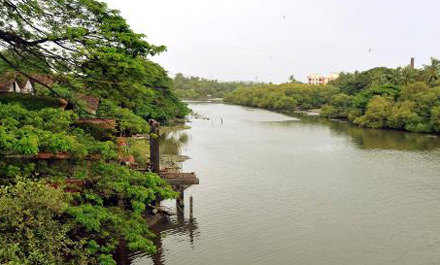 Kallayi is one of the rivers in Kerala, India. It originates in Cherikkulathur in the Western Ghats at an altitude of 45 m and is 40 km long. It is linked to the Chaliyar River by a man-made canal on the south side of the small timber village of Kallayi lying on its banks. The Kallayi was known for its timber businesses, but now many of these have been closed down.

The village of Kallayi, about six km from Kozhikode city, has an archaic
charm that attracts many. Its location on the banks of River Kallayi
which connects with the Chaliyar river, helped the village to grow as a
bustling timber trade centre during the late 19th and early 20th
centuries.

During that period, it grew to become the largest
timber trading centre in Asia. Timber was floated down from the forests
of Nilambur to the various mills of Kallayi through the Chaliyar and
Kallayi rivers. Teak and rosewood, known for their strength and
durability, were sawn to size in the timber mills here and then
transported for trade.

During the 20th century, there was a
steep decline in the trading activity. Today, only a few timber mills
exist in the area and one can spot a few logs from these timber yards
floating on the Kallayi River.

Another interesting sight here is
the iron Kallayi Bridge that was built by the British.  The view from
the bridge of the surrounding areas is delightful. If you reach the
place sometime in the evening, wait till the sun sets to set out for the
bridge. The sunset, when seen from the bridge, is simply breathtaking.

Town:
The KSRTC buses facilitated by the state of Kerala make it possible for all to reach the place with an ease. Hence, if you are planning but concerned about how to reach Kozhikode by bus then Kozhikode can be reached via road from Coimbatore (178km), Kochi (190km), Mangalore (221km), Bangalore (359km) and Trivandrum (399km). Kozhikode Bus tickets can be booked online with great ease.
Airport:
The presence of Karipur International Airport which is also called the Calicut International Airport located at a distance of 23 km from the Kozhikode town solves a lot of problem of the visitors on how to reach Kozhikode by air. Flights from Calicut to Delhi, Bangalore, Mumbai, Hyderabad, Kochi and to other major cities are easily available.
Railway Station:
The city has its own railway station. It is well connected to all the major cities of the state. It solves each and every problem of the visitors about how to reach Kozhikode. You can get easy transport facility from the railhead to reach a particular destination.
District:
Kozhikode
Longitude:
11.218056
Latitude:
75.783505