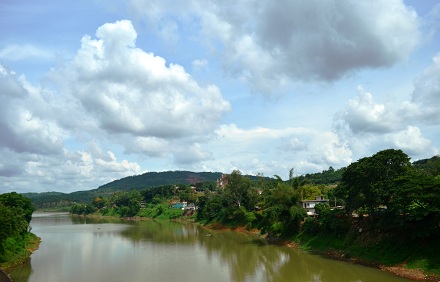 Iritty is a municipality and a taluk in the district of Kannur in
the state of Kerala, India. The town is the main market place for the
farmer communities in the surrounding regions.

Iritty is known as TheCoorg Valley in God’s Own Country. Iritty is one of the fast upcoming towns in Kerala having an enormous scope of development. Iritty got municipal status when Government of Kerala recently decided to upgrade Keezhur-Chavassery Grama Panchayat as Iritty Municipality along with formation of Kannur Municipal Corporation, 27 new other municipalities and 66 new grama panchyats.

Being surrounded by hills, this rapidly growing town is attracting more number of tourists. A number of tourist homes on the Iritty riverside have popped up in recent years to exploit the regions’ tourist potential.

Staying in the homely environments of such homes and waking up listening to the rhythmic flow of the river is an enchanting experience. The steel girder bridge built over the river also evokes awe in many visitors. It is to be noted that the bridge is more than 70 years old. It was built by British official Ernest James. Built over two pillars with three spans, the bridge is a true architectural glory.

A river flowing through Iritty is more
commonly known as Iritty Puzha/Iritty River. Tourists visiting Iritty
have the option of staying at a number of riverside Tourist homes, from
where they can view the Iritty river.

There is a steel girder bridge,built in 1933, over the river. There is a Dam in the place Pazhassi for irrigation purpose named ‘PazhassiDam’. it is almost 10 km from thetown. Wayanad tourist destinations are near from this place.

Iritty is the major commercial center for its adjacent villages. Most of the people in the villages nearby are engaged in cultivation of cash crops like pepper, cashew nuts and rubber. Although there are more developed towns in Kannur like Mattanur, Iritty houses the headquarters of many significant government offices.

Tourist spots in and around Iritty:

Pazhassi Dam – Major tourist attraction in Iritty is unarguably Pazhassi Dam. Built across Valapattanam River, the dam is named after the legendary warrior of Kerala called Pazhassi Raja. Pazhassi Raja’s birthplace is situated near the dam site. The dam and its vicinity is so blessed with natural beauty that you would scarcely want to return.

There are also boating facilities in the dam organized by the Kannur District Tourism Promotion Council. Famed to be the sole reservoir with gardens in the entire district, Pazhassi dam is a favorite stopover for people of all ages. The gardens and the Childrens’ park have been built with the aim of entertaining its visitors.

There are beautiful sculptures across the garden of which the one of Buddha’s mountain and Pazhassi king are noteworthy. Water from the Pazhassi dam is used for meeting the irrigation needs of Kannur district. It was in the year 1979 that the dam was built under the then Prime Minister Moraji desai .