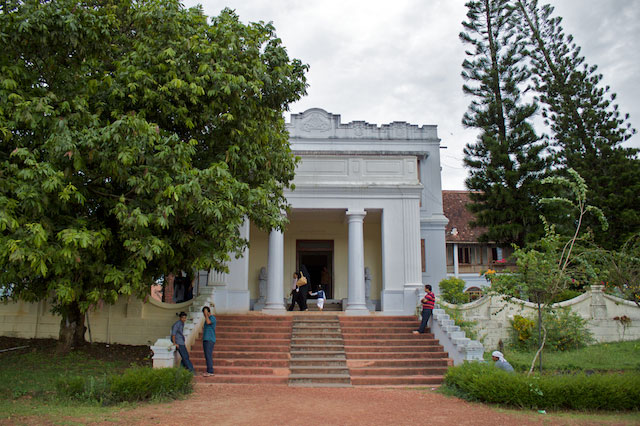 If you are keen on visiting the largest archaeological museum in Kerala, then come to the Thripunithura Hill palace. The palace built in 1865 was the former residence of the Kochi Royal family and is situated close to the city of Kochi on the Kochi-Chottanikkara route.

The palace was taken over by the Department Of Archaeology in 1980 and later converted into a museum. It was opened to the public in 1986.

This elegant looking palace built in the traditional architecture of Kerala comprises 49 units and is on a 52-acre land noted for its terraced landscape dotted with ponds, fountains and lawns. The palace currently houses a full-fledged ethno-archaeological museum and also Kerala’s first ever heritage museum.

At the Thripunithura Hill Palace, you would come across the oldest building in the palace complex, which is a single-storeyed Kerala style ettukettu constructed around 1850 AD. Close by this structure are a pond and a temple. The other buildings at the hill palace display architecture, which is a combination of traditional and western. A building that would stand out here due to its modern style is the three-storeyed building constructed in 1950 that functions as the office.

Stepping into the museum here, you would come across 14 categories of exhibits including paintings, murals, sculpture in stone and plaster of paris, manuscripts, inscriptions, carvings and many other items. The collections displayed in the museum are mainly from the Travancore Royal House, Paliam Devaswom and from the Department of Archaeology. An outstanding item on display here is a gold crown embedded with precious stones. You would also appreciate the collection of rare and valuable coins, ornaments, majestic beds and samples of epigraphy displayed at the museum.

If you happened to be an antique buff, then certainly the 200 antique pieces on display here at the palace museum would be of great interest. They comprise pottery and ceramic vases from China and Japan, Kudakkallu (tombstone), Thoppikkallu (hood stone), menhirs, granite, laterite memorials, rock-cut weapons belonging to the Stone Age and wooden temple models. The museum is also noted for its great collection of plaster cast models of objects from Mohenjo-Daro and Harappa of the Indus Valley civilization. A gallery of contemporary art is also part of the museum here.

Moving into the Paliam gallery, you would find collections donated by the Paliyath Achans, who were hereditary Prime Ministers to the Cochin Maharajas for a long period. There is another gallery here that features royal furniture including the Simhasana or the throne of the king.

The Portrait gallery at the museum has on display oil portraits of the Maharajas of the erstwhile Cochin Kingdom. Also featuring in the gallery are paintings in the Thanjavur tradition. And entering the gallery for wood carvings, you would come across wood carvings from the 14th century as well as unique ivory items and wooden sculptures.

A heritage museum was opened in 1995, in which traditional household utensils, artifacts and materials used for religious worship are exhibited.

One of the interesting galleries here at the Hill Palace museum is the Weapon gallery and Sculpture gallery. Old weapons collected from different places and stone sculptures ranging from 10th century up to 18th century can be found here. And in the Bronze and Metalware gallery, rare bronze and silver items from a period between 14th and 16th century are displayed. The gallery for Porcelain has for you about 160 items that include porcelain or pots, Chinese dishes and cups.

At the Numismatic gallery, inviting your attention would be denarius (roman silver coins), punch marked coins and coins from the British period in India. The exhibits in Epigraphy gallery are inscriptions on stone, copper plates, palm leaf records, grandhas (books) and Torah in goat’s skin in Hebrew language. There is also a Folklore and Folk Arts gallery featuring some old musical instruments and clay models.

And if you are interested in big-sized exhibits, then walk into the gallery for Chariots. Here, you will come across displays of horse drawn coaches imported from England and formerly used by the Maharajas of Travancore.

At the Hill Palace museum you can also check out a recently opened (2001) gallery for Crown and Jewelry. This gallery has on display nearly 200 items. The Royal Crown and gold ornaments decorated with precious stones are some of the exhibits here. But, this gallery is open to visitors only on Fridays, Saturdays and Sundays.

The surroundings of the Thripunithura Hill Palace have several species of flora and include rare medicinal plants. A portion of this has been converted into a botanical garden with exotic tropical tree species brought from Central America and Australia. Visitors to the museum can also avail of the recreation facilities here. There is also a deer park in the palace premises that was started in 1992. Horse riding is also part of the recreational activities here.