Ezhimala, A Must Visit Place in Kannur 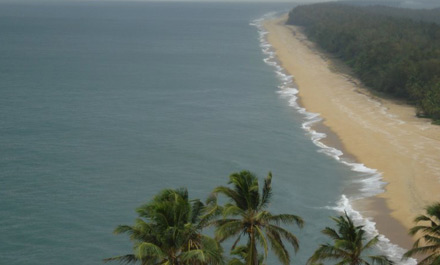 Ezhimala is one of the famous tourist places in Kerala situated in Kannur District. Ezhimala hill has a height of 286 meters from the sea level. The place is also famous for its historical values. Ezhimala was one of the battle fields of Chola – Chera wars in the eleventh century. And the history tells that Ezhimala was the first capital of Moosika dynasty in the tenth century. The place has another importance that is the “Indian Naval Academy” is situated at Ezhimala.

Ezhimala has a strong link with the Indian Epic ” Ramayana”. During Rama- Ravana war, Ravana killed many of the Rama forces including Lakshmana. Then Lord Hanuman went to Himalaya Mountain to collect the medicine “Mrithasanjeevani” which has the power to bring back died one’s to life. While taking the Himalaya mountain with “Mrithasanjeevani”, a small part of the mountain was dropped from Hanumans hand and it fell in seven parts( one touching the other) near the Payyanur- Ramanthali coastal region. It is believed that the presence of Lord Hanuman is still there at Ezhimala Hills. It is also believed that Ezhimala was visited by Lord Buddha who was the founder of Buddhism.

The Indian Naval Academy (NAVAC) of the Indian Navy wing situated at Ezhimala was inaugurated by the Prime Minister Dr. Manmohan Singh on eighth January 2009. Naval Academy of Ezhimala is located over 2,452 acres of land. It is a restricted area that the public are not allowed inside the Naval Academy area without permission. Naval academy is very close to the Ettikulam Beach. Ettikulam Beach is a beautiful bay for the tourist visitors: which gives a mind blowing experience to the nature lovers. The scenery from the beach to Ezhimala Naval Academy is really a nice view especially at sunset.

Ezhimala is the part of Ramanthali Panchayat near Payyanur town. Payyanur is one of the Major towns in Kannur which is located in the northern part of the district which is also very close to Kasargode district. Payyanur means the “The land of Lord Subramanyan” (Payyan means Lord Murukan) and a famous Subrahmanyan temple is there at Payyanur.

The travel to Ezhimala is really a fantastic experience and we can see the whole Payyanur from the top of the Ezhimala. From there you can view the complete beauty of Payyanur with rivers, roads, paddy fields and which are bordered by the Arabian sea.