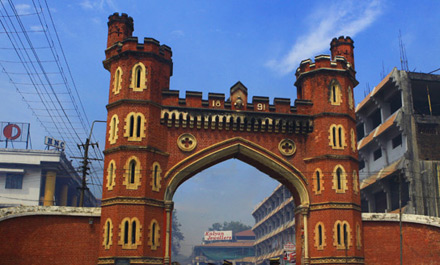 The East Fort area in the Capital City of Thiruvananthapuram bears a lot of historic significance. The East Fort houses several magnificent palaces, palatial houses, and agraharams (Brahmin houses). Standing out is the Padmanabha Swamy Temple, dedicated to Lord Vishnu. The Fort has stood witness to many events in the annals of the erstwhile Travancore Kingdom, and also to the development of the Capital City of Thiruvananthapuram.

The entire East Fort area has been declared by the State Government as a heritage site. For a visitor, the imposing gateway of the East Fort, painted in white and located on the eastern side, facing the famous Chalai bazaar is the usual way to get inside the Fort. Built in AD 1747 by King Marthanda Varma, the East Fort is the most prominent of the forts. One can also find two mandapams (platform with a roof supported by pillars) at the top, which were once used to announce royal proclamations.

A bit towards South of East Fort gate is the fort gate called Vettimurichakotta with rooms for guards on either side. The construction of this fort, was initiated by King Vishakam Thirunal. Located near this fort is C.V.N. Kalari the famous centre for Kalaripayattu, the traditional martial art form of Kerala.

As one enters through the East Fort gate, straight in line with the entrance is the Padmanabha Swamy Temple. Built in traditional Kerala and Dravidian style, the architecture of this seven-storeyed temple-tower itself is a sight to behold. The deity of the temple is Lord Padmanabha, the incarnation of Lord Vishnu, the preserver of life according to Hindu belief. Here, the 18 feet long deity is seen as lying on a serpent called Anantha. The Kings of Travancore ruled the land as the servants of Lord Padmanabha. Inside the temple, a mandapam (platform with pillars) carved out of a single piece of rock displays eye-catching sculptures.

Padmatheertham, the temple pond is located in front of the temple. On the way to the temple, one would also find a piece of engineering marvel called Methan Mani. This is a clock and on its dial is depicted a man’s face with two goats on either side. Every time the clock strikes an hour, the man opens his mouth and the goats would butt his cheeks.

Built in 1818 is the Padinjarekotta or the fort gate situated on the western side. This fort gate was built following the closure of another gate called Nariadachankotta, which is situated close to it. Just like the East Fort, the Padinjarekotta also has a touch of French architecture. The annual Aaraatt procession from the Padmanabha Swamy Temple passes through this fort.

Other notable fort gates include the Azheekotta located quarter of a kilometer from Padinjarekotta and the Aashupathrikotta situated near the Government Hospital.

Inside the fort area, one can find several small and big palaces, and palatial buildings built in traditional as well as western style of architecture. These are buildings, which were once used by the members of the Travancore royal family. Except for few, most of them now function as various offices.

Among the prominent palaces in the East Fort area, the Ananthavilasam Palace is considered the most beautiful of all. Built by King Vishakam Thirunal in 1880, the palace is located to the South of the temple. The palace follows the Barouque and Rococo styles of architecture.

Close to Ananthavilasam Palace and built by King Sree Moolam Thirunal in 1885 is the Krishnavilasom Palace, which integrates the traditional and western styles of architecture.

Another notable one among the palaces in East Fort is the Sree Padam Kottaram, which is one of the oldest palaces inside the fort. Situated to the North of the temple, the palace has played host to kings and queens who arrived to participate in the temple rituals.

Other palaces of prominence are the Saraswathivilasam and the Sundaravilasam palaces. The Saraswathivilasam Palace built in Kerala as well as western architectural style is marked by high walls and roofs, long verandahs, arched gates and circular pillars. It was built towards the end of the 19th century, and was once residence of Kerala Varma Valia Koyi Thampuran.

Located close to the Saraswathivilasam Palace is the Sundaravilasam Palace, built by King Sree Moolam Thirunal. Displaying both traditional and western styles of architecture, the palace is also the venue for Pallivetta a ritual observed as part of the annual Aaraatt festival at the Padmanabha Swamy Temple.

A visit to the East Fort will not be complete without the Kuthiramalika and the Navarathri Mandapam.

Kuthiramalika or the Horse Palace is on the left side of the road leading to the Padmanabha Swamy Temple. It is also known as the Puthenmalika and was built in 1844 by King Swathi Thirunal. The palace takes the name of Horse Palace due to the wooden carved structures of prancing horses along the entire length of its upper floors. This two-storeyed building is built entirely in Kerala style of architecture. An interesting feature of this palace is a raised alcove built by King Swathi Thirunal to compose songs, to meet musicians from different parts of the world, and also to have a good look at the temple. Kuthiramalika also has a museum housing rare artifacts belonging to Travancore Kings, paintings of Raja Ravi Varma etc.

The Navarathri Mandapam, situated to the East of the Padmanabha Swamy Temple is the venue for the annual ten-day Navarathri celebrations. The annual Navarathri music festival is also held here, which is attended by musicians from across the country.

Nearby the East Fort, one may also visit some of the palatial houses, locally called as Amma Veedu. These are houses more than 150 years old, specially built for the consorts of Travancore Kings. These houses display a blend of Kerala and European styles of architecture. With beautiful matchless interiors, these houses do not have cement and iron as part of their building materials. The prominent Amma Veedus include the Arumana, Thanjavur and Vedasseri.

Poovar Backwaters, a Must Visit Place in Thiruvananthapuram

Poovar  is a small coastal village situated in  southern tip of Trivandrum, the capitial city…

Poovar is a small coastal village in the Trivandrum district of Kerala state, South India.…

Kottur, lying in the lap of the Agasthyakoodam hill range in the Western Ghats and…