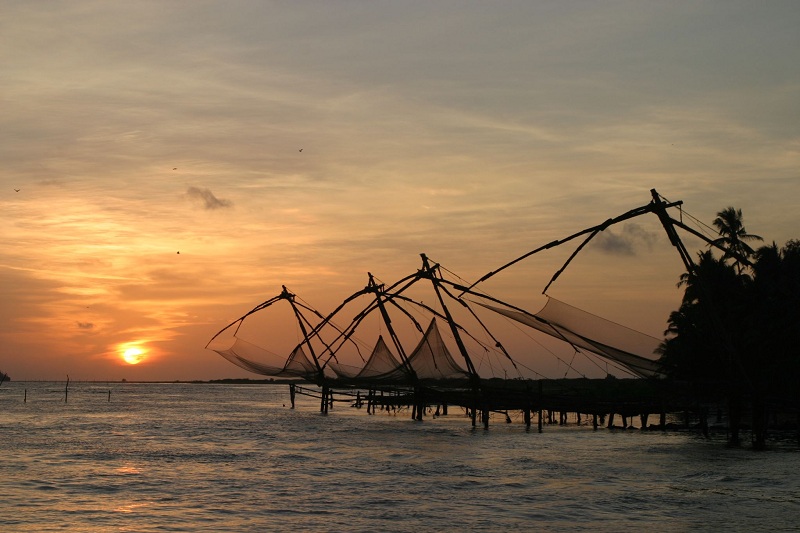 The nomenclature of Chinese fishing nets suggests that it has its origin in China. It was introduced by the Chinese explorer Zheng He.

The Chinese fishing nets in Cochin Harbor were set up between 1350 to 1450 AD. The beaches of Cochin are beautifully lined with these Chinese nets. Chinese fishing nets abound in the Vasco-da-Gama Square near the Fort Kochi. They can also be seen in and around Bastion Bungalow, Santa Cruz Basilica and VOC Gate.

Chinese fishing nets in Cochin are locally known as Cheenavala. In Cochin, the Chinese nets are suspended in the mid air all along the coast. The nets are set up on bamboo or teak poles and are basically fixed land installations. These nets are horizontally suspended over the sea, giving an appearance of huge hammock. For balance, these nets are counter balanced by stones tied to ropes. Each net spreads over an area of about 20 meters. Counterweights, usually stones about 30 cm in diameter, tied to ropes of
different lengths, facilitate the working of the nets. Often, lights,
attached to the teak posts. are suspended above the net to attract fish.

Each fishing net is operated by more than four fishermen and is made in
such a way that the weight of a man walking on the main plank is enough
to cause the equipment to be pulled down into the sea. Fishing is
usually done in the morning and early evening. The net is descended into
the water for a short time and then raised delicately by pulling on the
ropes. The slow rhythm and balancing of the net is spellbinding to a
first-time viewer.

The sight of the Chinese nets, suspended in mid air and standing in line on the beaches, when silhouetted against the sunset is breathtakingly beautiful. It is, undoubtedly, one of the most photographed sights in Kochi.
For the best view of the nets, head to the Vasco da Gama Square, the narrow walkway that runs along the Fort Kochi beach.

Town:
Fort Kochi is accessible by bus or ferry. The bus ride from Ernakulam town, which is nearly 13 km away, takes about an hour and the ferry ride from Main boat jetty at Ernakulam about 20 minutes.
Airport:
Cochin International Ariport, about 35 km away
Railway Station:
Ernakulam, about 15 km away
District:
Ernakulam
Longitude:
9.968338
Latitude:
76.242297