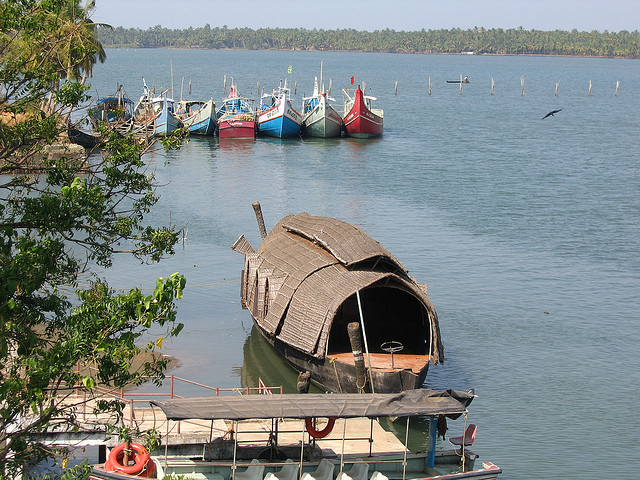 Chettuva Backwater is located in between Engandiyur Panchayat and Kadappuram Panchayat of Thrissur District in Kerala. The backwaters start at Enamakkal Lake and empties to Arabian Sea. The destination is blessed with mangroves, Chinese fishing nets, islands, migratory birds, estuary and a fort. In 2010, Government of Kerala has declared Chettuva as heritage village.

For centuries, Kerala has been celebrated for the healing touch of its enduring ayurvedic system of medicine. Just as the Himalayan kingdom of Kashmir was renowned for its rich and verdant valleys with their deodar and walnut trees.

Now, in a unique experiment, the Kerala-based Rajah group has constructed an elaborately carved Kashmiri houseboat to house guests who come seeking the curative and rejuvenating properties of ayurveda.

The boat has been anchored along a 20-acre island in Chettuva, a coastal village in Thrissur district, to provide ayurvedic treatment in a novel way.

The aim is to offer ayurvedic treatment in an atmosphere which helps to keep the mind calm and quiet.

“An atmosphere quite different from the current trend of combining recreation with relaxation, while at the same time ensuring that it is not merely a hospital,” Mr Abdul Salam, Managing Director, Raja Ayurvedic Hospital Network, said.

Raja Islands has its own way combining the positive aspects of the hospital and the resort, he added.

The uniqueness of the houseboat, made of deodar wood brought from Kashmir, is its extraordinary architectural design and carvings. Each room is filled with the fragrance of deodar wood to refresh the minds of the visitors.

The boat, 120 metres long and 22 metres wide, was constructed in the island itself over six months by Kashmiri workers.

The carvings in deodar and walnut woods were carried out in Jammu and Kashmir and the total investment was around Rs 1 crore, according to Mr Salam.

The houseboat would be kept at Raja Island, the property owned by the group in the Chettuva backwaters on the Guruvayur-Kochi strech.

It has all the facilities of a five-star hotel – air-conditioned bedrooms with attached bathrooms, dining rooms, sit-outs, etc. The daily rent for the boat is Rs 7,500 and the boat can be hired entirely or partially.

Apart from the houseboat, eco-friendly cottages and Kerala houseboats have also been set up by the group for various kinds of ayurvedic treatment.

The Kerala houseboat is a modern concept wherein the boat is constructed in the traditional style on the top of two boats tied together.

Town:
Road Distance or driving distance from Guruvayur to Chettuva Backwater Boating is 88 kms
Airport:
Cochin International Airport, about 58 km from Thrissur and about 76 km from Chettuva, is the nearest airport.
Railway Station:
Guruvayoor, about 8 km, is the nearest railway station.
District:
Thrissur
Longitude:
10.550660
Latitude:
76.049176