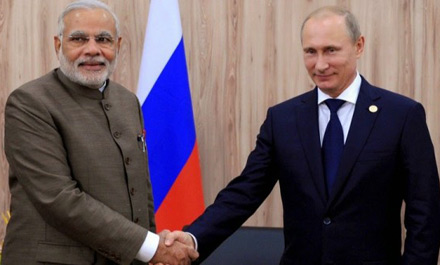 “The President of the Russian Federation, Vladimir V. Putin, will pay an official visit to India on 10-11 Dec, 2014, for the 15th Annual India-Russia Summit,” said the statement.

Putin will be meeting Prime Minister Narendra Modi Dec 11 for the summit during which both sides would seek to draw up a long-term vision of their key strategic ties.

The Russian president will also address a joint session of the Indian parliament.

Though both Modi and Putin have met earlier at international gatherings, no structured bilateral talks have been held so far.

Modi met Putin in July during the BRICS – Brazil, Russia, India, China, South Africa – summit in Fortaleza, Brazil and later during the informal BRICS meeting in Brisbane, Australia, on the sidelines of the G20 last month. During the Brisbane gathering, the meeting between Modi and Putin was brief.