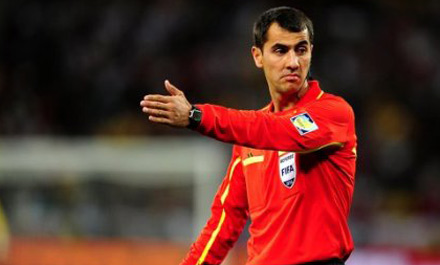 Uzbekistan’s Ravshan Irmatov, who holds the record for refereeing the most World Cup matches in the history of the competition, is among the officials headed to India to officiate in the Indian Super League.

The Asian Football Confederation’s best referee for four consecutive years between 2008 and 2011 and the man who officiated the opening match of the 2010 World Cup between hosts South Africa and Mexico will start officiating from mid November.

“Ravshan Irmatov is among the best referees around the world. He officiated five matches at the last World Cup in South Africa and was handed four matches at this year’s World Cup in Brazil. That shows just how good he is,” said one AIFF official.

Irmatov, the only Uzbek referee to have officiated in the finals of a Fifa tournament, will be helped by two assistants from Uzbekistan.
The AIFF first sourced referees from Major League Soccer (MLS) and are now looking at other countries, including Australia and Uzbekistan, to officiate in the high-profile league.

Australian referee Jarred Gillet, along with two assistants from Australia, will be the next foreign referee who will officiate ISL matches, starting later this week.

Gillet was the 2011-12 A-League Referee of the Year and officiated in the 2012 A-League Grand Final, where he awarded a 95th minute penalty, a decision that was the subject of much debate long after the season had concluded.

“We cannot leave anything to chance with refereeing. It’s not easy to get the best referees from around the world but those who are making it to the ISL have a proven track record. That will help us minimize any refereeing errors,” said the AIFF official.

MLS referee Christopher Penso who officiated the opening game, besides several others at the start of the tournament, came in for sharp criticism after he failed to spot and send off Atletico de Kolkata striker Fikru Teferra for his headbutt on FC Goa defender Gregory Arnolin during the tempestuous tie in Goa last week. He was immediately withdrawn from officiating further in the league.

The only foreign referee at the moment is Canadian David Gantar and the AIFF remains more than pleased with his performance.