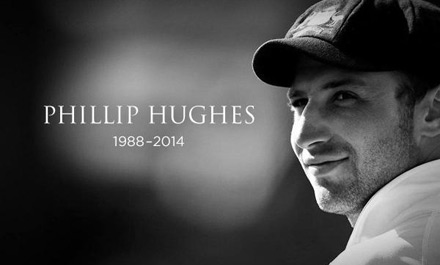 The cricketing world is in shock following the death of Australian batsman Phillip Hughes.

In response, the start of the second day’s play in the final test between Pakistan and New Zealand in Sharjah has been suspended.

The Pakistan Cricket Board and New Zealand Cricket agreed to delay the start of play and will decide their future course of action.

Hughes, who played 26 Tests for his country, collapsed face first on the ground after being struck by a bouncer from Abbott during a Sheffield Shield game between South Australia and New South Wales on Tuesday.

Hughes, 25, had been wearing a helmet but the ball missed it, striking him at the top of the neck and causing a vertebral artery dissection, which resulted in a “massive bleed” on the brain.

Indian icon Sachin Tendulkar said he was shocked to hear of Hughes’s death, calling it a “sad day for cricket”.

“Deepest condolences to family, friends and well wishers. RIP,” said Tendulkar, who played alongside the left-hander in the Indian Premier League.

Although he had not yet turned 26, Hughes had already plied his trade for teams around Australia and overseas.

In 2012, he signed on with English county side Worcestershire, shortly after being dropped from the Australia Test team.

“As a player he was a sort of a run thief really, he could score runs at certain angles and places that you thought how could you do this,” he said.

Off the field Hughes was described as a humble country boy whole fitted into the community with ease.

“Worcestershire is a very rural place, and I think he felt very much at home,” Roach said.

“What also appealed to the players was that he (Hughes) wasn’t this superstar coming over, a great test cricketer who would bully everybody.

“He was a person who was a human being and he had a little cheeky smile, just sat in his corner, he was just Hughesy.”

Messages of support had been flooding in from around the world from the big cricketing nations of India, Pakistan, South Africa, New Zealand and England, since the accident.