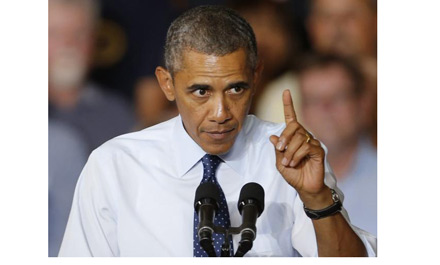 US President Barack Obama has written to his Russian counterpart Vladimir Putin over Moscow’s breach of a 1987 missile treaty, the White House said Tuesday.

The treaty bans ground-launched ballistic or cruise missiles with a range of 500 to 5,500 km.

The letter about US findings over Russia’s testing of cruise missiles in violation of the Intermediate-Range Nuclear Forces Treaty was sent late Monday, and lists steps for Russia to take to return to its compliance, Xinhua quoted media reports.

“This is a very serious matter, which we have attempted to address with Russia for some time now,” White House spokesperson Josh Earnest told reporters at a daily news briefing.

“I know that there have been reports that the president informed President Putin, via letter, of our determination and as an indication that this is a matter that merits the serious attention of the leaders of both the United States and Russia,” he said.

The Obama administration Tuesday submitted to the Congress its latest report on compliance with arms control, non-proliferation and disarmament accords, which determined that Russia was in violation of its obligations under the pact.

“We encourage Russia to return to compliance with its obligations under the treaty and to eliminate any prohibited items in a verifiable manner,” State Department spokeswoman Jennifer Psaki told reporters at a daily press briefing.

“The administration will work to resolve the compliance issues outlined in the report through bilateral and multilateral means,” she said.