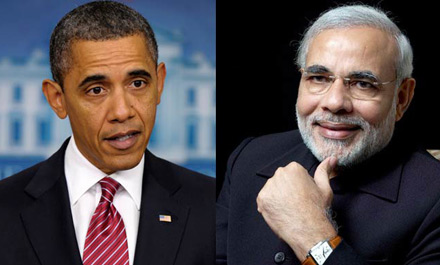 Obama to be chief guest at Republic Day celebrations

India’s relations with Washington have flourished in the past decade, although they have also had tussles over trade and other issues. The two countries are developing a strategic partnership prompted by shared concerns about China’s increasingly assertive territorial claims in the Asia-Pacific region.

Modi met Obama on a visit to the United States in September and they have spoken by telephone since. Their relationship is thought to have helped resolve a major trade spat in the World Trade Organization.

Modi used a Twitter message to announce Obama as the chief guest on Republic Day, which marks the enactment of India’s constitution on Jan. 26, 1950.

Dhruva Jaishankar, a South Asia specialist at the German Marshall Fund of the United States, said the invitation to Obama was a sign of “a radically altering political calculus” in New Delhi, where previous leaders traditionally sought to keep some distance from Washington.

“This visit will also mark a real turnaround over eight or nine months ago, when questions were still being asked about Modi’s willingness to cooperate with the United States, given his history of having been denied a visa,” Jaishankar said.

Modi was denied entry into the United States from 2005 until he was elected prime minister in May, after allegations he did too little to stop religious riots that killed at least 1,000 people, mostly Muslims, in his home state of Gujarat. Modi denied any wrongdoing.

India traditionally invites a head of state to participate as chief guest for Republic Day celebrations, which culminates in a military parade including its nuclear capable missiles.

Much of the hardware dates back to the Soviet era, when India had close ties with Moscow, while more recent defense purchases include billions of dollars of U.S.-made equipment.

Last year’s chief guest was Japanese Prime Minister Shinzo Abe, who has taken a tough line with China over its territorial claims.