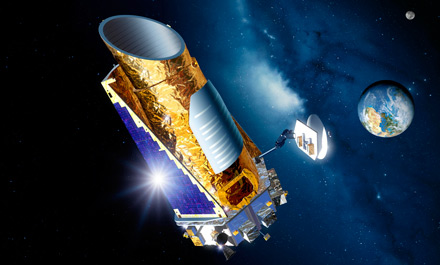 The planet is 2.5 times the diameter of Earth and follows a close, nine-day orbit around a star that is smaller and cooler than our Sun.

NASA’s planet-hunting Kepler spacecraft, which is carrying out a new mission has made its first exoplanet discovery — a ‘super-Earth’ located 180 light-years from Earth.

Lead researcher Andrew Vanderburg, a graduate student at the Harvard-Smithsonian Center for Astrophysics in Cambridge, Massachusetts, studied publicly available data collected by the spacecraft during a test of the new K2 mission in February 2014.

This led to the discovery of a planet, HIP 116454b, which is 2.5 times the diameter of Earth and follows a close, nine-day orbit around a star that is smaller and cooler than our Sun, making the planet too hot for life as we know it.

HIP 116454b and its star are 180 light-years from Earth, toward the constellation Pisces.

The discovery was confirmed with measurements taken by the HARPS-North spectrograph of the Telescopio Nazionale Galileo in the Canary Islands, which captured the wobble of the star caused by the planet’s gravitational tug as it orbits.

HARPS-N showed that the planet weighs almost 12 times as much as Earth. This makes HIP 116454b a super-Earth, a class of planets that does not exist in our solar system.

The exoplanet discovery was made after astronomers and engineers repurposed Kepler for its new mission.

“Last summer, the possibility of a scientifically productive mission for Kepler after its reaction wheel failure in its extended mission was not part of the conversation,” said Paul Hertz, NASA’s astrophysics division director at the agency’s headquarters in Washington.

“Today, thanks to an innovative idea and lots of hard work by the NASA and Ball Aerospace team, Kepler may well deliver the first candidates for follow-up study by the James Webb Space Telescope to characterise the atmospheres of distant worlds and search for signatures of life,” Dr. Hertz said.

Since the K2 mission officially began in May 2014, it has observed more than 35,000 stars and collected data on star clusters, dense star-forming regions, and several planetary objects within our own solar system.

The research paper reporting the latest discovery has been accepted for publication in The Astrophysical Journal.