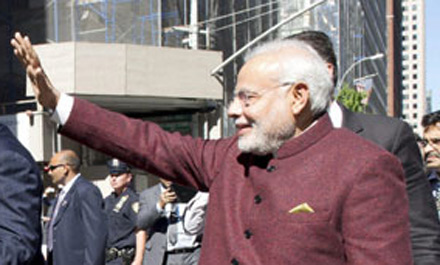 Narendra Modi arrives in New York for a five-day visit

While all eyes are on Indian Prime Minister Narendra Modi, who is set to address the UN General Assembly (UNGA) on Saturday, September 27, 2014, his speech will be “forward looking” even as India has made its official rebuttal of Pakistan Prime Minister Nawaz Sharif’s Kashmir comments on the floor of the UNGA. Sharif has blamed India for the calling off of bilateral foreign secretary level talks last month.

External affairs ministry spokesperson Syed Akbaruddin, to a question on whether Modi would rebut Sharif’s remark on a plebiscite in Kashmir, said that Modi “is going to make his statement in a forward looking manner”.

Akbaruddin said that India would use its right-to-reply and set the record straight on Sharif’s remarks.

“This will be done on the floor of UN and it would be done today (Saturday),” IANS adds.

India exercised its right of reply on the floor of the UNGA to rebut Pakistan’s statement.

Abhishek Singh, first secretary in the Indian mission to the UN, said in his right-to-reply: “I would like to bring to the notice of this august House that the people of Jammu and Kashmir have peacefully chosen their destiny in accordance with the universally accepted democratic principles and practices and they continue to do so. We, therefore, reject in their entirety the untenable comments of the distinguished delegate of Pakistan.”

Sharif had in his address at the UNGA said that the “core issue” of Jammu and Kashmir has to be resolved and pushed for a plebiscite in the state.

Akbaruddin also said that there is no meeting planned between the Modi and Sharif.