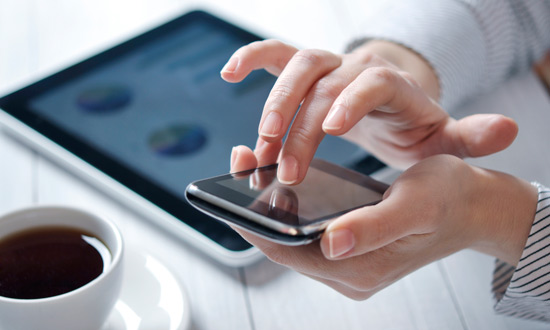 We really love our smart phones — but we should learn to embrace the monthly bill, too, a new economic report suggests.

How much do consumers value mobile connectivity? Consumers in developed economies (the U.S., Germany, and South Korea) put a price tag of more than $6,000 per year, or 12% of their income, on it, according to a new report out today from The Boston Consulting Group.

Sales and use of mobile phones generated nearly $3.3 trillion in revenues globally in 2014, according to The Mobile Revolution: How Mobile Technologies Drive a Trillion-Dollar Impact report, commissioned by Qualcomm. But the aggregate annual consumer surplus — the benefit beyond what they pay for mobile services — adds up to $6.4 trillion.

The majority of people surveyed were willing to give up dining out or going on vacation for a year in order to keep their mobile phone, said the researchers, who surveyed 7,500 consumers in the Brazil, China, Germany, India, the U.S. and South Korea.

In China and Korea, a majority of users would give up a subscription to home broadband Internet rather than go without a mobile phone, the report said.

“The typical U.S. consumer reports that their mobile phone connection creates more than $5,800 in value for them per year, over and above what they pay. That surprised us,” said David Michael, a San Francisco-based senior partner of The Boston Consulting Group (BCG) and lead author of the report.

“It was amazing to see the value placed on mobile services by consumers in emerging markets,” he said. “More than 60% of Chinese and Indian consumers say that mobile services have enabled them to find new income-generating opportunities.”

The mobile technologies industry invested $18 trillion in capital expenditures and in research and development from 2009 to 2013 — and created 11 million jobs, the report said.

Advanced LTE mobile networks are 12,000 times faster than the prior 2G generation of mobile networks, the researchers said. “An incredible degree of progress in just a few short years.”

“The report notes that the advanced LTE mobile networks are 12,000 times faster than the prior 2G generation of mobile networks—an incredible degree of progress in just a few short years.”