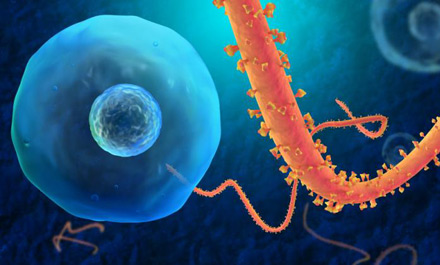 For many, global public health seems like an abstract and distant problem – until the Ebola virus is diagnosed among people in our midst.

Though no one would call the Ebola pandemic a good thing, it has presented an opportunity for scientists to alert the public about the dire need to halt the spread of infectious diseases, especially in developing and densely populated areas of the world.

“What often seems like an abstract notion becomes very concrete when a deadly virus previously contained in Western Africa infects people on American soil,” said Wondwossen Gebreyes, professor of veterinary preventive medicine at The Ohio State University. “It does create a certain sense of urgency and awareness that this world is much smaller than we think.”

Gebreyes is the lead author of an article published in the Nov. 13, 2014, issue of PLOS Neglected Tropical Diseases that makes the case for accelerating efforts to put “One Health” into action. One Health refers to a strategy to more fully understand and address the links between animal health, human health and the environment.

The paper emphasizes the danger of zoonotic infections – those transmitted from animals to humans – and the staggering damage they do, especially in developing nations that lack a variety of resources. These diseases don’t just kill people, but they cause tremendous economic harm in a variety of ways: killing livestock, reducing the ranks of qualified health and education providers, creating political unrest and stopping development in its tracks.

There is an urgent need for progress. Approximately 75 percent of emerging infectious diseases are those transmitted from animals to humans, and the world is on pace to experience at least one deadly disease outbreak each year.

Gebreyes cited the current Ebola epidemic and the 2009 H1N1 flu pandemic as “stark reminders of the unpredictable nature of pathogens and the importance of animals in the ecology and emergence of viral strains.” Evidence suggests that bats were the original carriers of the strains of Ebola that sicken humans, and pigs were the source of the 2009 flu.

“To attain a true One Health approach, we need broad recognition of the interconnectivity among the health of humans, domestic or wild animals and the environment, which are all closely linked by the pathogens that they share,” he said.

At the heart of the effort to adopt One Health globally, and particularly in developing areas, proponents agree, is the need to build capacity – of skilled personnel, laboratories for disease diagnostics and testing, educators to perform training, and technologies that enable far-reaching and coordinated pathogen reporting and surveillance systems.

Ohio State is doing its part. Gebreyes has spearheaded a partnership between the university and academic institutions and service agencies in Ethiopia designed to create sustainable collaborations in teaching, research and outreach by embracing the principles of One Health. Three issues have topped the agenda to date: improved screening and treatment for cervical cancer; a roadmap for the prevention and control of rabies as a model for the One Health platform; and improvements in environmental health, food safety and food security.

“Rabies is the year-round Ebola of Ethiopia, as it regularly kills people – particularly the young. It is 100 percent fatal if interventions such as vaccines and awareness are not implemented,” Gebreyes noted. “We consider this partnership a model for how to build effective, sustainable capacity.”

A worldwide initiative also exists: The International Congress on Pathogens at the Human Animal Interface has convened twice, with the third meeting scheduled for August 2015 in Thailand. But while the congress delegates address the big picture, they recognize the need for grassroots recruitment of scientists and policymakers in higher education, government agencies and nongovernment organizations – plus farmers, health care providers and ecologists – to create measurable change on a global level, Gebreyes said.

For global One Health to be implemented effectively and widely adopted, the risks associated with emerging infectious diseases need to be quantified, and the capacity needs and available resources must be assessed, Gebreyes said. World health organizations provide guidelines for quality control systems, but they aren’t necessarily applicable to fit developing regions’ needs and are not systematically applied in low-resource settings, he said.

With that in mind, the congress has identified four priority areas for capacity-building, primarily in low-resource settings:

“These are recommendations. The congress delegates recognize that it’s impossible to take a ‘one size fits all’ approach,” Gebreyes said.