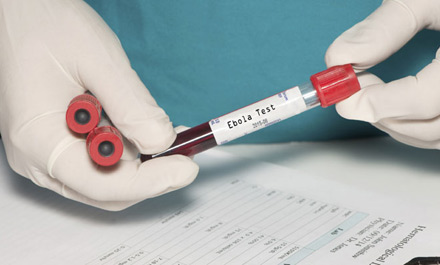 A 15-minute blood and saliva test for Ebola is to be tried in Guinea.

It is portable, solar-powered and can be used at room temperature.

The project is being funded by the Wellcome Trust medical charity and the Britain’s Department for International Development.

“A reliable, 15-minute test that can confirm cases of Ebola would be a key tool for effective management of the Ebola outbreak – allowing patients to be identified, isolated and cared for as soon as possible,” an official from Wellcome Trust said.

“It not only gives patients a better chance of survival, but it prevents transmission of the virus to other people.”

“This pilot study is particularly promising because researchers have considered how to make the test suitable for use in remote field hospitals, where resources – such as electricity and cold storage are often in short supply,” the official added.

Ebola is currently diagnosed by hunting for the virus’s genetic material in the blood of a patient.

But it requires dedicated laboratories that can keep the components of the test at very low temperatures.

Patients in Conakry will still have the proven test, but the new faster method will be trialed at the same time so the results can be compared.