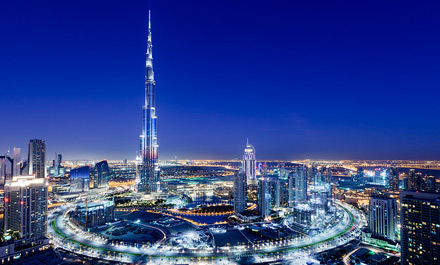 Around 2,500 security personnel will oversee traffic and security arrangements during New Year’s eve celebrations at Burj Khalifa. An android app has also been launched to provide the public with information.

The Event Security Committee announced on Thursday announced the security plan for the celebrations. Officers from Dubai Police, Civil Defence and other departments will help secure the event.

Authorities are also looking into closing down the Burj Khalifa Metro Station on the day and directing people to the Business Bay and Dubai International Financial Centre stations, but nothing has been finalised yet.

Sixteen support services tents will be distributed in the Burj Khalifa area. They will have paramedics, first aid, a lost and found section, logistical support and police.

“In 2013, around 1.7 million people attended the celebrations at Burj Khalifa. We are expecting around 1.2-1.4 million this year,” Colonel Abdullah Khalifa Al Merri, head of the Event Security Committee and deputy director of the Department of Protective Security and Emergency at Dubai Police, said at the press conference.

He urged the public to follow instructions and directions on sign-boards that will be put around the city.

The new app, which will soon be available on iOS, has all the required information for people who would like to attend any of the events, including New Year’s eve celebration.

“People can get direction to the location of the event, know where the parking spaces are, toilets, ATMs, lost and found, information desk and so on,” he said.

People can also use the app to mark the area where they parked their vehicles.

Lieutenant Colonel Juma Bin Suwaidan, director of the Events Department at Dubai Traffic Police, advised people who want to be part of the event or have bookings in restaurants in the area, to be there preferably before 6pm as the roads might be closed later.

“We will be monitoring the area and nearby streets. As soon as the parking areas in Mohammad Bin Rashid Boulevard are filled, we will close it down. However, it will be closed down at 8pm at the latest,” he said.

Lt Col Bin Suwaidan added that police will assess the traffic density on the Dubai International Financial Centre Road and close it down starting from Shaikh Zayed Road, if it gets too congested. The same will be done on Al Khail Road.

“We recommend that people use public transportation and free shuttle buses to get to the event as we have worked on making it easier and quicker,” he said.

Shuttle buses will be available from four different locations in Dubai: Meydan, Dubai World Trade Centre, Zabeel Park and Al Jafiliya. People can park in those areas take the shuttle bus to the Burj Khalifa.

“We urge people not to use or park in the hard shoulder. We have seen many people do this last year on Shaikh Zayed Road, Dubai International Financial Centre Road and Al Khail Road. This creates traffic congestion and is dangerous. We will fine violators,” Lt Col Bin Suwaidan warned.

More information about the New Year’s is available online on Dubai Police and Emaar’s websites and social media outlets.

“In case this happens again, we will dispatch patrols and officers to arrange a designated spot for people to cross from.”

The Events Security Committee was created by Dubai Police in 2008 and their first assignment was to secure the opening of Atlantis Hotel in the Palm. Col Al Merri said that since then, they have secured 58 events in Dubai.

The committee includes members from various Dubai Government Departments that take part in securing events, such as the Roads and Transportation Authority (RTA), Dubai Ambulances, the Civil Defence and Dubai Health Authority, to name a few.

There will be six viewing areas in addition to the Downtown restaurants:

There will be separate areas for families.