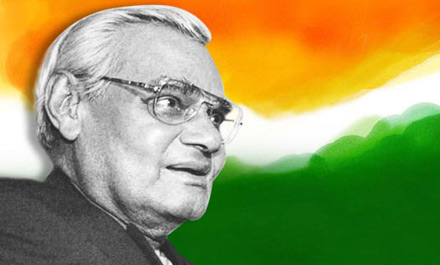 The announcement was made on the eve of Vajpayee’s 90th birthday and the 153rd birth anniversary of Malaviya on December 25. The ruling Bharatiya Janata Party (BJP) has been demanding the Bharat Ratna for Vajpayee for a long time. Last year, BJP patriarch Lal Krishna Advani had written a letter to the Congress party-led United Progressive Alliance (UPA) government requesting to award the Bharat Ratna to Vajpayee. The request was, however, overlooked by the UPA government.

Bharat Ratna is India’s highest civilian honour and so far 43 individuals have received the award. Vajpayee is the first BJP leader to be get the Bharat Ratna. He also happens to be the seventh Prime Minister to receive the award, while Malaviya will be the 12th person to be honoured posthumously. Earlier recipients of the award include former Prime Ministers Jawaharlal Nehru, Indira Gandhi, Rajiv Gandhi, Morarji Desai, Lal Bahadur Shastri, along with first Governor-General of free India C Rajagopalachari, and former Deputy Prime Minister Sardar Vallabhbhai Patel.

A Bharat Ratna for Malaviya, a freedom fighter and the founder of the Benaras Hindu University was proposed by Prime Minister Narendra Modi during his election campaign in May this year. Justice Giridhar Malviya, grandson of Pandit Malaviya, was one of those who proposed the nomination of Modi from Varanasi Parliamentary constituency. The Banaras Hindu University, founded by Malaviya, falls in Modi’s constituency Varanasi in Uttar Pradesh.

Modi has expressed delight at the announcement.

“Bharat Ratna being conferred on Pandit Madan Mohan Malaviya and Atal Bihari Vajpayee is a matter of great delight. The country’s highest honour to these illustrious stalwarts is a fitting recognition of their service to the nation. Pandit Madan Mohan Malaviya is remembered as a phenomenal scholar and freedom fighter who lit the spark of national consciousness among people. Atalji means so much to everyone. A guide, inspiration and giant among giants. His contribution to India is invaluable,” the Prime Minister said.

Politicians from across the spectrum welcomed the decision to honour Vajpayee.

Senior BJP leader LK Advani, a long-time political associate of Vajpayee, said “former prime minister Vajpayee has a blemish free record and deserves the Bharat Ratna. A Bharat Ratna for Atal Bihari Vajpayee should not be seen in terms of a reward for doing his duty but as an award that recognises his stature. It would be very appropriate and befitting for a patriot like Vajpayee.”

Former BJP leader Sudheendra Kulkarni said, “I am extremely happy with the decision. It is a fitting recognition for Vajpayee’s immense contributions to the country.”

Welcoming the decision, senior leader Lalji Tandon said, “Vajpayee always heard everyone. He was a good administrator. He always led a simple life with high values.”

“I wish the UPA government had risen above politics and conferred the Bharat Ratna on Vajpayee sahib earlier, it would have been a fitting gesture,” Omar said on Twitter Wednesday.

BJP leader Ravi Shankar Prasad said, “I am very happy. It is an emotional moment for me. The Bharat Ratna is given to the gems of India and there should not be any politics in awarding these gems.”

Eighty-nine-year-old Vajpayee, who was prime minister till 2004, is popular across party lines. He has stayed away from public life for the past few years because of his health. At his hometown in Gwalior, his family is overjoyed.

“It is a happy day for his family, the country, the whole world. He is the pride of the family. He is receiving the award late, but we are happy he has finally got it,” said his niece Kanti Mishra.

“It is a matter of pride. His party should be proud of him; he gave it his blood and sweat. This is a proud moment for the Vajpayee family. I welcome the move and it has come at the right time,” said Vajpayee’s another niece Karuna Shukla.

Vajpayee’s nephew Anoop Misra said, “we are all very happy. I would like to congratulate Prime Minister Narendra Modi for this. But this should have happened very early. This is India’s honour, everyone’s honour. People considered Vajpayee as their leader, world considered him a leader. He received love and respect across the political spectrum.”

“Vajpayee deserves the honour. I am delighted to join the celebrations for him. He was a true statesman. He made a clear distinction between leading the party and the country,” Sen said.