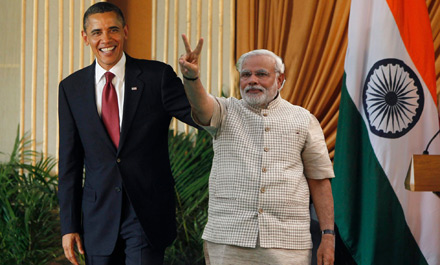 As President Barack Obama headed to India the White House called it a “genuine honour” and said he was very interested in injecting a new energy and vitality into the US-India relationship.

“We’ve got many colorful descriptions about the parade and other festivities that go along with marking this important day,” Josh Earnest said. “The President is looking forward to seeing it firsthand.”

Obama, who will be the first US president to visit India twice while in office, was also looking forward to a series of serious meetings with political leaders in India, and certainly the one with Prime Minister Narendra Modi, he told reporters Friday.

Obama, Earnest said, “certainly enjoyed the conversation” that he had with Prime Minster Narendra Modi when the latter visited Washington in September.

“I think he does see an opportunity to build a strong working relationship not just between our two countries, but between the two leaders who do share sort of a common sense of purpose and vitality,” he said.

While Modi is very interested in injecting that kind of energy and vitality into the relationship between the US and India, “Obama shares that desire,” he said.

“Making the first ever second trip by a US President to India during his presidency I think reflects the President’s commitment to India, the Indian people, and the relationship between the US and India,” Earnest said.

Asked about Modi’s “Make in India” call, the spokesman said there is an important economic component to the policy agenda in India.

There will be a number of US business leaders who will be traveling to India in conjunction with the President’s visit, and that is because there are tremendous economic opportunities for American businesses in India,” he said.

“And we are interested in strengthening those ties, both for the benefit of the Indian people.”

“But he’s the American President and he’s most interested in strengthening those ties to benefit the American people,” Earnest said.